March 2, 2020, 3:49 PM · We're back at Walt Disney World this week for the grand opening of Mickey & Minnie's Runaway Railway. But before we get to that main event at Disney's Hollywood Studios tomorrow, I snuck over to Epcot today to try the (relatively) new Regal Eagle Smokehouse.

First, don't worry about being hungry when you make it back to the American Adventure pavilion for this barbecue restaurant. Because after all the extra steps you'll be walking through the Future World construction maze, you're sure to be hungry.

For me, walking into Epcot now is deja vu from visiting Disney California Adventure a decade ago, when Disney was rebuilding that park's entryway, too. Sure, it's extra steps and probably a different set-up every few days, but if Disney improves the Epcot entry half as much as it did California Adventure's, I think everyone will be quite happy with the result here.

Anyway, on to the food. 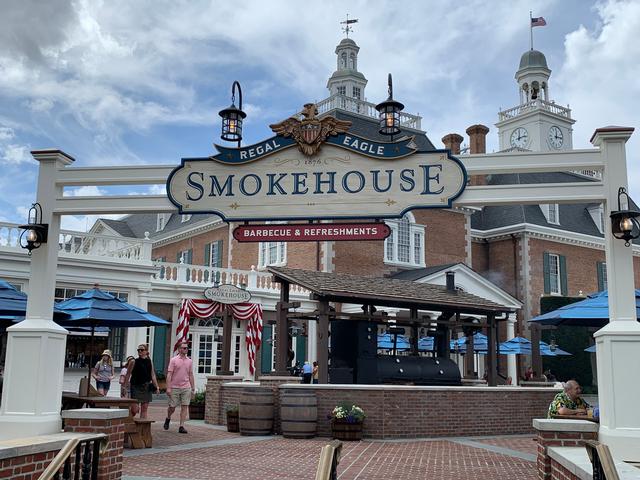 Regal Eagle serves a collection of regional barbecue from around the country, but if you don't want to commit to just one meat and sauce combination, go for the combo American Platter, with its selection of three available meats. I chose the ribs, brisket, chicken, plus baked beans with burnt ends for my side [$18.99]. 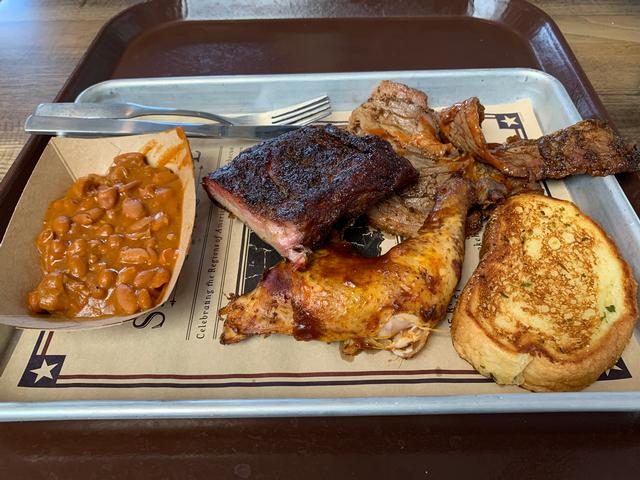 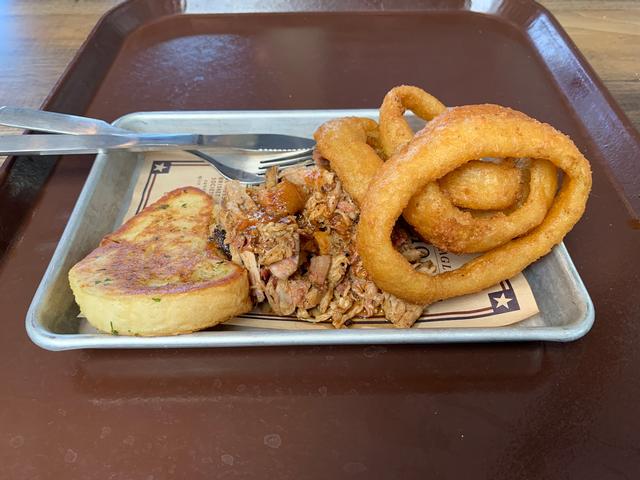 Honestly, I prefer barbecue without sauces, 'cause I want to taste the meat. As far as that meat goes, I'd rank 'em like this: ribs, pulled pork, chicken... and then the brisket. (We didn't try the sausage or the plant-based jackfruit burger.)

There's a touch of vinegar in the pork, but I hardly noticed the sweet "Kansas City" sauce on the chicken. The ribs were dry-rubbed and the clear highlight for me, with a nice bark and plenty of well-smoked meat.

The brisket, however, I'd avoid. I've been binging "The Chef Show" on Netflix and just finished the Aaron Franklin episodes, so I'll admit that I was walking in with ridiculously high expectations for a Texas brisket. But forget about queuing in Austin for a moment. There's better quick-service brisket than this in Orlando and even on Disney property. Stick with the pork or the chicken here, instead.

As for the sides, the onion rings were our top choice, though we were wishing we had tried the mac n' cheese, too. The beans oddly tasted more of mustard than brown sugar or ketchup and lacked the promised burnt ends. My mom had tried the coleslaw on a previous visit and turned a thumbs down on that, too. But we both enjoyed the garlic toast.

If I'm craving a quick and easy barbecue platter in Orlando, especially some brisket, I'm still driving to a 4 Rivers Smokehouse rather than making the trek through Epcot. And if I am confined to Disney property, I'd recommend The Polite Pig in Disney Springs for better overall quality. But the Regal Eagle does step up from the Liberty Inn it replaced, so it's not like this is a loss for Disney. A barbecue restaurant was the perfect choice for an American pavilion restaurant, and Regal Eagle delivers some fine options.

Now if Disney would just step it up with the brisket, it could be great.

"Honestly, I prefer barbecue without sauces, 'cause I want to taste the meat."

I agree! First taste the meat, then apply sauce as needed. If a restaurant serves meat that's completely slathered in sauce, then I suspect they're trying to cover up the blandness or saltiness of the meat.

I had a good brisket sandwich from the walk up stand at house of blues once, no idea if it’s still offered, but I enjoyed it more than the one at polite pig.

4R is overrated and expensive.

Bubbalou's Bodacious Barbeque off of Kirkman near universal has great ribs.

Being an orlando local, I love the local smokers off the street.

The reason why most BBQ places slather the ribs in sauce is because they boil or steam the meat first (and market it as "fall off the bone" tenderness). So they're covering up the bland taste.

This is a big step up from the previous restaurant, which was disappointing. EPCOT is known for it's dining experiences, and bad hamburgers and fries didn't cut it. Having a smoker out front going all day should bring lots of people in, just for the smell.

That's pretty pathetic that the beans with burnt ends side was devoid of the burnt ends. I know that can happen sometimes, but I read a similar refrain from others regarding this side dish. It does seem like the garlic toast and onion rings are the best of the bunch, but the best BBQ joints typically have a handful (or more) can't miss side dishes. It sounds like this restaurant is missing an opportunity here.

I'm still not a fan of having styles married to specific proteins. I know logistically it would be tricky preparing all of the meats in each of the trademarked styles, but I think having different platters themed to each of the distinct regions would be a better representation of American BBQ than the mishmash presented here. After all, if you go to a real BBQ restaurant (even the major chains) the meat is cooked to that region's style with sauces on the side if you want to switch it up. If you're in Memphis, you're going to get those dry-rubbed meats, but you can find vinegar/mustard-based sauces on the table if you want a more NC-style flavor profile.

What about those sauces? You noted that you don't like slathering your meat in sauce, but are the sauces served on the side in cups (or in bottles on the table), or dumped on the meat by the expediter? Why types of sauces do they have, and are they any good?

Always skipped this place in the past as just a fast eatery compared to all the great World Showcase spots but maybe a bit better now.

Um, that picture? The horror... That is not real bbq. I could barely tell where the brisket was at. When I did find it I realized if I was handed that plate I would have asked for a refund immediately. Like Russell said, those aren't baked beans with burnt ends. They are just baked beans. I would never order bbq at a Disney park to begin with, but that solidifies it in my mind.

Sauces are applied by the kitchen... and rather inconsistently, it appears.

Dream Island shows promise, but not much else, on its opening