March 3, 2020, 6:10 AM · After nearly 65 years as the stars of Disney's theme parks, Mickey and Minnie Mouse finally get a ride of their own, as Mickey & Minnie's Runaway Railway debuts in Disney's Hollywood Studios at the Walt Disney World Resort.

The ride officially opens to the public tomorrow, but I and other invited reporters are getting the chance to ride during its media preview today. Disney has asked that we do not film a POV, but it has allowed us to post a couple of minutes of video highlights from on the ride.

No attraction in theme park history more enthusiastically embraces the trope of "and then everything goes terribly wrong" than Runaway Railway. The show begins with a Mickey short entitled "Perfect Picnic," in which Mickey and Minnie sing about their upcoming day in the park, when nothing can wrong and nothing can stop them now.

So of course you know what's coming next. That they've chosen Goofy to drive the train that will take us along to their "perfect picnic" only seals our fate. 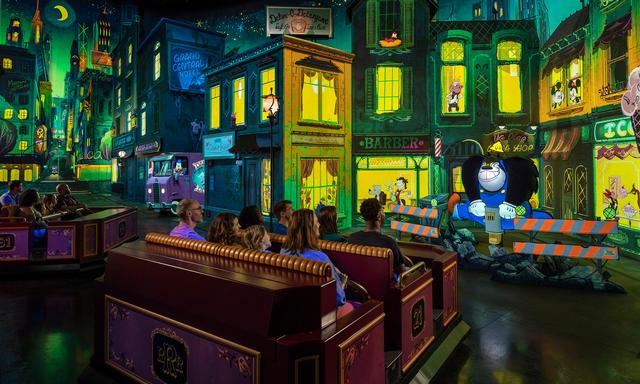 Still, Runaway Railway consistently manages to surprise with how it delivers those things gone horribly wrong. It starts in the preshow, which ends with a delightful surprise that leads us into the ride portion of the attraction. 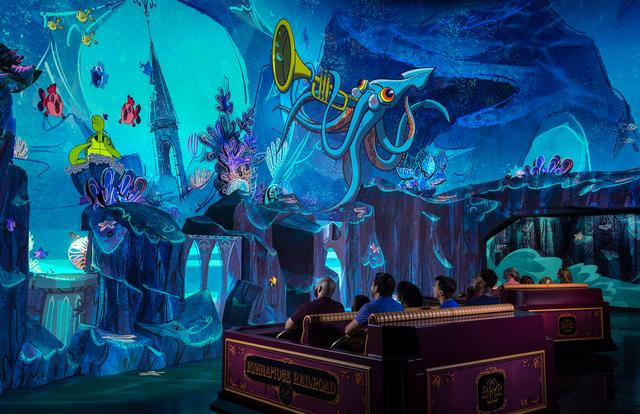 Once on board, the surprises continue as our railroad train - the ultimate in a tracked vehicle - splits apart to become a series of trackless ride cars. Like in a cartoon, throw away your expectations for how physics should work, for we're on an adventure where, as Disney says, "Mouse rules apply."

Or, as another Disney character might have said, "Forget it Eddie, it's Toontown."

There's plenty of media here, but much of it is projected upon three dimensional surfaces or - appropriate for Disney - multiple planes, rather than single flat screens. That helps to create the illusion that you are in a cartoon, rather than watching one. The dynamism of the trackless ride vehicles also reinforce a physical sense that you cannot expect what will happen next in this chaotic world.

Of course, in the end, it all works out fine and we reach our destination to enjoy that "perfect picnic." And it is perfect... because we all had one heckuva a time getting there.

Update: The five-minute ride portion of the attraction varies considerably based upon which of the four cars you ride in. The first two cars give you the best view of Goofy at the beginning of the ride, but the back two cars pick up some detail at the tail end of initial scenes that you will miss from the front two cars.

The cars switch positions several times during the ride, so you aren't always first or last into a scene. Personally, I preferred the first car overall and thought the last car the weakest experience, with cars two and three somewhat interchangeable. But they're all a wonderful ride, so no seat here is worth rejecting.

For more on the creation of the attraction, please see my interview with Imagineer Charita Carter.

And here is the opening moment:

I will SO miss the Great Movie Ride - however, if the park is going to the theme of immersing the audience in movie worlds, then this looks about the most ambitious and impressive way to put the audience into a cartoon. Looks fantastic. Can't wait to ride it.

GREAT REVIEW! And even greater is the news that the ride is both charming and exciting! Because WDI was so tight-lipped about the attraction, some concluded that the ride would be a lackluster disappointment. It's fantastic to hear that DHS is welcoming a new attraction that is both steeped in its traditions and supported by new technology!

This looks pretty good with such bright and vivid colors and imagery. I agree with Robert that it has a lot of Roger Rabbit's Toontown Spin in the overall look and feel of the ride, which makes me wonder how it will play in Disneyland steps away in Toontown.

Since the vehicles just use a simple lap bar, I assume that there are no gimbles (up/down or banking movements) on them, leaving all sensation of movement left to the visuals (similar to RotR prior to the escape pod).

My main concern though is the throughput on this attraction. It appears that only 3 cars are loaded at a time, which offers a maximum of 24 people per load cycle. Assuming that CMs can dispatch "trains" every 2 minutes, you're looking at an hourly capacity of 720 guests per hour. If they can dispatch every 90 seconds, they would crank that up to 1,080. Is there another load platform like there is on RotR, or is this ride going to suffer the same capacity issues that is plaguing RotR?

The media is projected upon three dimensional surfaces rather than single flat screens - is that what they mean by 2 1/2 D? Disney made a big deal about it being dimensional without the use of glasses. Or are the flat screen projections enhanced somehow? Projecting on dimensional surfaces goes back to Madame Leota and the graveyard busts in Haunted Mansion, and more recently, Frozen in Epcot and 7 Dwarfs Mine Train. Actually the screens in Guardians of the Galaxy Tower in DCA look pretty good, they look almost dimensional because they are so hi res.

As much as I'll miss Great Movie Ride, I'll agree its time had passed by as slow-moving AA attractions aren't as cool as they were 30 years ago. This does look very good and, more importantly, fun which is something we always want out of Disney rides. A bit of Mystic Manor vibe but also great effects so this should be another winner.

As for capacity, four cars can load at a time (there's a camera car in the back that is cycling through the handicapped entrance today). And I timed dispatch at about one "train" per minute today, so that's a pretty good throughput if they can get the full four people per row.

My Orange County Register colleague Brady and I did Disney's on-ride cam, but Disney provided pretty much the same abbreviated highlights rather than a full ride experience. Anyway, here's that video.

It looks really fun & does really seem embrace putting the rider into the world of "cartoons". Looks like there's so much going on, that repeat rides seem inevitable.

Can't wait to it comes to Disneyland!!

What an utter tragedy replacing The Great Movie Ride with this!!

How did the ride itself perform? Any downtime?

No downtimes that I saw or heard about during the media event. It opened to a published five-hour wait this morning, which within an hour was marked down to three hours.

FWIW, Disney gave participating reporters covering the event a one-time line pass into Rise of the Resistance, so I went on that yesterday, too. And that was the smoothest I've ever seen that ride operate. No delays, and all effects working. I believe they got to boarding group 140 or so by the end of the 12-hour day.

Another E-ticket for DHS, the E-ticket capital of Orlando!
Looks like a better ride in the 3rd car as more of the show is seen from the 3rd car.
Congratulations, Imagineering! MMRR is a HUGE success!
“Nothing can stop us now!”

I was wondering if there was a 4th car - it looked like there was from a couple of the interior shots of the ride scenes, but the video of the loading platform suggested just 3. That's definitely better for capacity, and if they can indeed dispatch cars every 60 seconds, it should be able to meet demand (almost 2,000 people per hour).

The attraction does seem to be getting overwhelmingly positive reviews, though a ride on a penny grocery store pony installed in a Disney park would get rave reviews from the Drones, but I still wonder how the look and feel of this attraction will play in Disneyland in such close proximity to Roger Rabbit. I worry that the fun, dynamic Toontown Spin will meet its demise from the new kid on the block with its technicolor wizardry.

That's possible. I often forget about Roger Rabbit (and I imagine others do as well). Toontown certainly NEEDS a shiny new top tier attraction, but I'm simply not sure what it will mean for ToonSpin.

The new style (from the animated shorts) seems like it works quite well in the ride. I know the new animation style is a bit polarizing (ahem, Goofy)......but its hard to imagine the more traditional (corporate) version of the characters working here. I think this might help those who were / on the fence with the new versions of the characters.

What condescending, insulting drivel above.

As for the ride, it looks great. It is a trackless vehicle?

If Toon Spin gets a much needed refurb, I think it will provide a fine complement to Runaway Railway. The story is fine, and Disneyland needs to be adding capacity, not spending millions to wind up close to even.

"What condescending, insulting drivel above."

But so true - Go read any WDW fan site. It makes it difficult to gauge the quality of any WDW attraction, though many of the more reputable and objective sites appear nearly unanimous in their praise of MMRR.

@Robert - I agree that Disneyland needs to add capacity, but the duplicative style between attractions just steps apart may relegate Toontown Spin, which was already one of the lower tier attraction in the park, at the bottom of the barrel. Perhaps the additional foot traffic created by MMRR to the dead end land (maybe MMRR will force Disney to create another entrance/exit to Toontown near Galaxy's Edge) will draw more interest to Roger Rabbit. The IP is so ancient these days (released in 1988) with such little awareness of the characters in the current generation of youngsters - not to mention the objectification of women portrayed in Jessica Rabbit (not that Disney doesn't already have attractions that contain or closely skirt questionably subject matters). I just hope a new big-ticket draw that MMRR represents doesn't force Disney's hand here to either gut, close, or make Toontown Spin a seasonal attraction.

Not sure what you call a "fan site" but I`m a member on Disney message boards, and it`s not mindless cheerleading. I stand behind my description of your nasty comment as drivel.