Dream Island shows promise, but not much else, on its opening

March 1, 2020, 10:28 AM · Speak to anyone who's visited theme parks for long enough to remember Disneyland in its early days, and they'll likely tell you a story about the Haunted Mansion — how it lurked on the edge of the park for years before it opened, teasing guests, inspiring them to imagine what lay within.

Those glimpses of rides not yet ridden, of stories not yet told, have served as one of the best marketing tools at the disposal of park management ever since. But what happens if, uhh...

...almost all of your marquee attractions are closed on opening day?

Exploring Moscow's new theme park Dream Island on its opening day as a guest for the media event, I got to know a couple of Russian words pretty well: ????? ????????. 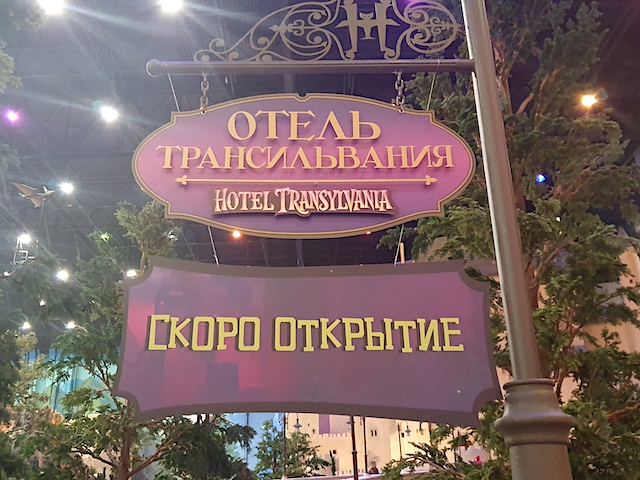 And so, any kind of rope drop dash to the heavy hitters firmly out of mind, I took a different approach to exploring the park. But first, some background.

A massive construction of 300,000 square metres - the largest indoor theme park in Europe, not that it has much competition - the complex has given new life to a disused former industrial zone away from the centre of the city, its massive "have I seen that before?" castle facade looming over the surrounding area.

You might remember it being kicked around at one point as a DreamWorks park. Having left that licence behind (or having been left behind by the licence, who can say?) the designers maintained the concept, and filled the IP void with a mixture from elsewhere; some familiar, some not, some brand new.

The TMNT takeover of New York makes perfect sense, and actually gives the area a unique quality that other parks have lacked when creating similar "American city" zones. Its rides - the aforementioned coaster, a pendulum, and another ride still hidden away - feel organic to the kinetic space they occupy. Hello Kitty meanwhile gets a cafe and spinner ride, Hotel Transylvania the still-to-come (presumably) dark ride, and the Smurfs feature in the central kiddie ride section.

Beyond that, there's a “Mowgli in the land of the dinosaurs” section (I wish Kipling could have been around for that pitch meeting), an Abandoned House scare-maze walkthrough, and a Snow Queen area that gives the park its indoor-castle. (And which manages to feel like its own take on the classic story, rather than an attempt to cash in on Frozen.)

But before you hit the turnstiles: shops. Lots of shops. Amiran Mutseov, the director behind the park, made his name developing retail projects - and it shows here. He's spoken openly about the influence of CityWalk, Downtown Disney, and, most significantly of all, the Mall of America in Minneapolis.

It's that last reference that feels so pertinent. Dream Island is one of the clearest examples yet of how quickly the line between shopping malls and regional theme parks is blurring. The mall - with its fountains, entertainment and internationally-themed facades - folds seamlessly into the park proper. Entrance ticket aside, they are much the same experience, and designed to be treated as such.

(It's worth noting that while much of the project was driven by the Russian team, the architectural and design work was lead by the Cunningham Group of Minneapolis - who contributed to California Adventure's redesign, among other recent Disney projects.)

Of all the parks I've been to in recent years, the one it actually reminds me most of in certain respects is Shanghai Disneyland. This is a space built for efficient movement, with wide paths, a clear direction of travel throughout and facades scaled up to match. 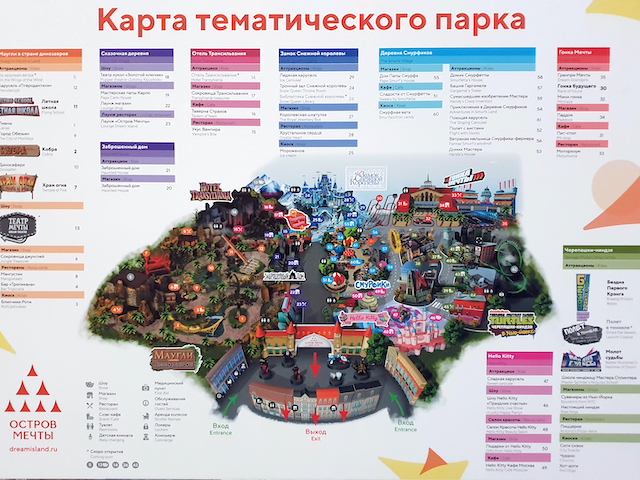 The trade-off in this approach tends to be a lack of the soul and intimacy that make parks so endearing to visitors. But while Dream Island might lack the nuance or imaginative detail of a Disney or Universal, it's a clear step above many of the knock-off parks we've seen in the emerging Asian markets.

And crucially, this is a significant theme park for a market that currently didn't have one. A market where, for most people who are likely to visit, a "Disneyland" isn't a specific property owned by one company, but a catch-all term for the kind of designed space they've seen the world over but had little chance to experience themselves. A disneyland, rather than a Disneyland, if you will.

And on those terms, it works. Some parts have a slight Happy Valley air to them - the Hello Kitty area being a prime example, where the simple, bold blocks of colour look merely cheap rather than stylised - but in others there's a surprising level of detail. 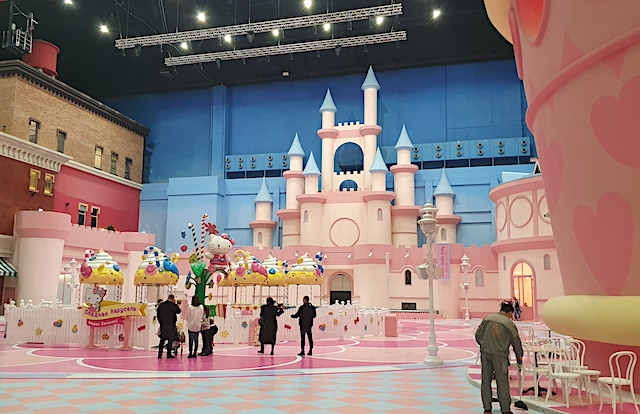 I was genuinely stopped in my tracks by the mist effect surrounding the Hotel Transylvania castle, for example, and the TMNT New York area is full of easter eggs and touches that bring the place to life. Engaging with the park on that level, rather than skipping over it on the hunt for big beasts to ride, I found a lot to appreciate. And noticed a lot of appreciation from the guests around me, too. 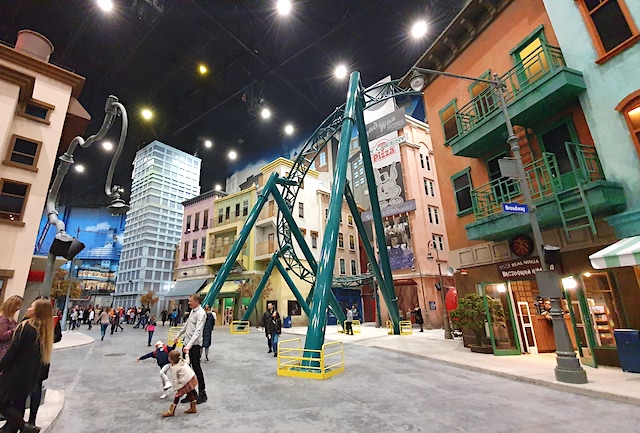 The rides I did manage to get on were standard flat rides elevated slightly through their surroundings. I haven't been on a Top Spin in years, but the one here - with definite Tomb Raider vibes - caught me off-guard with a brisk programme. The TMNT pendulum, while far from the most extreme I've been on, was given a fun twist of being set in the remains of a part-collapsed building, heightening the thrills through near-collisions with walls and debris. 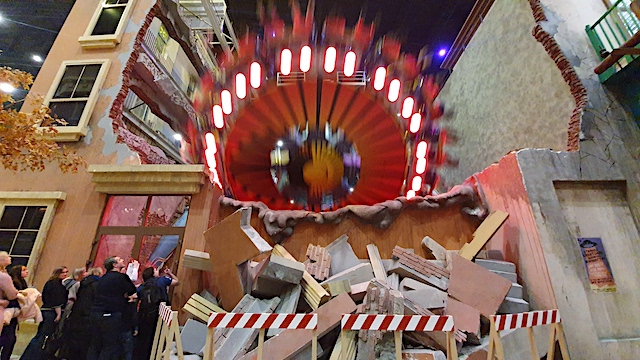 I even found myself enjoying Gargamel's Tower far more than I thought I would; an enclosed bouncing tower ride for kids, game-ified with the kind of blasters and target lights usually found on interactive dark rides.

One aspect of the Disney approach I was pleased to see the park borrow is the approach to customer service. These might just be the most friendly, helpful and professional employees I've come across in a park outside the USA or Japan. Instructions are explained clearly, and nothing seemed to be too big of an ask for those I troubled for help.

However, an area where the park management could stand to be a little more inspired is in operations. With only one person managing loading guests and capacity on the rides pretty limited, the queues really do crawl. These are not people-eaters, and it shows. To make things worse, there's often something that needs to be explained - the mechanism of certain rides, or (I think) a story in the case of the haunted house.

My press pass got me into the fastpass lines, but I still ended up queueing more than 30 minutes in some cases. It was opening day, so presumably busier than it will usually be - but it needs the added capacity of those additional rides sooner rather than later.

Food is a little more imaginative than you might expect, but still mostly fast food versions of Western standards. (There's a plethora of options in the shopping district just outside the theme park area itself, which is where most guests seemed to be heading.)

I ate at two table service places, mainly because - my Russian language skills not being the best - the calmer pace gave me a better chance to make myself understood. Both were a decent standard, but the balcony view of the second floor restaurant on the park's promenade made it worth the time I spent there.

So, should you visit as a traveller from abroad? Well, it's not going to be a primary reason to plan a trip. Short of anything unexpected hiding behind the closed attraction doors, it's not a park that will hold a particularly unique appeal to anyone who's visited a decent regional park back home.

As part of a week's visit to Moscow however, a half day's trip could be well worth your time. It's hard to give a definitive verdict on a park without experiencing its main attractions. But the city itself offers so much to foreign visitors, rich with culture and incredible architecture - Red Square alone is a more enthralling environment than any we've written about on this site. It's one I'd recommend, theme park or no theme park.

So a quick trip down the metro line and an admission fee that compares very favourably to others certainly makes it an even more tempting proposition. But the definitive answer to how Dream Island compares to other parks still lies behind two words:

Would be great so see more photos

Edit: There now. Thanks so much!

One of the most fascinating Tip articles I've had the pleasure to read. Thanks!

My apologies for the delay in getting all the photos and the video posted. While Ben was uploading from Russia, I was flying to Orlando for the Runaway Railway event. But we have Ben's photos and video up now!

One thing that I was quite impressed with (in the pictures of) Warner Bros. World in Dubai, was how efforts were put into making the ceiling look like sky. This Dream Island park has some beautiful buildings, but looking up you can see that you are in, what is essentially, a huge warehouse.

One of the major problems of an indoor park. Unless you spend big to hide the ceiling, you are only going to reach a certain level of immersion.

The other issue I always have with indoor parks, is topography. Without any variation to the land surface, they immediately have a sense of sanitized artificiality. The extra cost of putting hills into your indoor theme park might not make sense, but it would go a long way to add to the overall feel of theming.

Warner Bros World > Dream Island > Nickelodeon Universe. Is that pretty much the consensus on the new indoor theme parks?