New Star Tours puts fans into ‘The Rise of Skywalker’

December 20, 2019, 11:08 AM · Disney theme parks around the world today debuted a new “Star Wars: The Rise of Skywalker” overlay to their Star Tours rides. And it’s the tightest integration between a theme park attraction and a Star Wars movie yet.

Since the new version of the ride contains scenes from the new Star Wars movie, you should consider the attraction itself somewhat of a spoiler at this point, thought it does not actually reveal anything that hasn’t been teased or that would harm your enjoyment of the film, if you haven’t seen it yet.

Quite the opposite, in fact. If you ride Star Tours first, you might just burst with excitement during a particular scene in the film, as you will have already experienced it - from a different perspective - on Star Tours.

At this point, we enter spoiler territory for the film, so bail out and come back later if you’re looking to avoid them.

The new Star Tours includes two locations from “Rise of Skywalker.” First, the Kef Bir ocean moon of Endor where the second Death Star is wrecked...

First look at the new Kef Bir scene from #TheRiseofSkywalker that is now included in #StarTours at #Disneyland and #WaltDisneyWorld. #StarWars

...and, second, the hidden Sith planet of Exegol. Our “halftime” transmission character setting that up is from Lando Calrissian, which ties the second scene on Exegol directly into the action of the film. 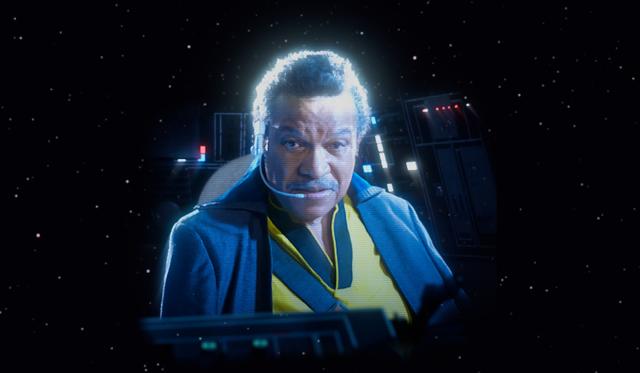 That scene makes us characters in a Star Wars movie, as our Star Tours vessel becomes one the ships that rally to save the Resistance in the movie’s climatic battle. With Star Wars: Galaxy’s Edge, Disney officials talked non-stop about creating a platform for Disney park visitors to live their own Star Wars story. But now, on Disney’s original Star Wars attraction - Star Tours, Disney has at last instead given many fans what they actually wanted - to become part of an official Star Wars story, and not by observing from the sidelines or after the fact, but by participating as canon characters in the ultimate Star Wars battle.

Creative director Tom Fitzgerald and his team have filled the new Star Tours with more Easter eggs than the White House lawn ever had. C3PO even quotes Captain Rex at one point. And that’s not the only callback to the original version of Star Tours.

“JJ Abrams said he wanted to put a bow on Star Wars with Rise of Skywalker, and we wanted to do the same with this for Star Tours,” Fitzgerald said this morning, after a media preview of the new version at Disneyland.

The new version's finale calls back to the original Star Tours with a crash landing back in the Star Tours spaceport, a location we never returned to in The Adventures Continue versions. We even get to see Captain Ace start to come after C3PO for taking his ship, along with callbacks to the pit droids, the luggage and other gags from the preshow video. It's a light note upon which to end what promises to be an emotion battle scene for many fans.

But that scene almost didn't happen on the ride, Fitzgerald said.

"It wasn't part of our original script. Our original script was to do Kef Bir, the ocean moon, and to do a transmission," Fitzgerald said. "But I would keep going up [to Lucasfilm] and reading the script, and the script kept evolving. This battle scene in episode nine is so epic, and so critical to wrapping up the saga, that if this is the wrap up of Star Tours, it would be strange to not have it."

"I mean that the finale of the film is is everybody coming to the rescue, right?"

Fitzgerald said that JJ Abrams personally approved the decision to include the battle above Exegol in the ride, but that the late decision to add that scene put the project under enormous pressure.

"We had to really scramble to get it done."

Fitzgerald also said that putting the Star Tours ship on the waves of Kef Bir appealed to the creative team because recreating that ocean wave movement is the perfect application for a motion base theater. And there's also a moment with an original "Star Wars" film icon inside the fallen Death Star on Kef Bir, too. (I will leave that one for fans to discover.)

"Hopefully some fans will get it."

At some point, though no one would say when that would be, Star Tours will return to a random selection of destinations, with all the new scenes promoting the recent trilogy films thrown into the mix. That will give Star Tours - The Adventures Continue more than 100 possible combinations, Fitzgerald said.

I wonder if they will ever be able to move Star Tours to the planet of Batuu, and integrate it fully with that land. I know it would just be putting ANOTHER flight simulator into Galaxy's Edge, but it only makes sense to put it in the universe, where it belongs.

You'd think they'd wait a bit for those who haven't seen the film yet but still looks damn good. Personally I liked ROS although can easily see lots of haters and this was a highlight.

All aboard the 2020 Hype Train for Disney's Avengers Campus