All aboard the 2020 Hype Train for Disney's Avengers Campus

December 19, 2019, 4:12 PM · Disney went all-in on Star Wars in its theme parks in 2019, but the story from "a long time ago in a galaxy far, far away" isn't even Disney's biggest entertainment franchise. That honor, as measured by total box office, goes to Marvel. And in 2020, it's Marvel's turn in the Disney parks.

The next attraction on the list of our most-anticipated additions for 2020 is Avengers Campus — coming to Disney California Adventure. It will be one of three Avengers Campuses at Disney Parks, with lands coming to Walt Disney Studios Paris and Hong Kong Disneyland, too.

The DCA version is taking over the former A Bug's Land space, with an opening expected in the latter half of the year. In Disney's backstory for the lands, the "Campus" in Avengers Campus stands for "Centralized Assembly Mobilized to Prepare, Unite and Safeguard." It will be the home of the "Worldwide Engineering Brigade" (i.e. WEB — ya think maybe Spider-Man will be involved here?), an organization that will work with the Avengers to recruit new heroes around the world.

Apparently, some Marvel character embedded at Walt Disney Imagineering has the superpower of being able to deconstruct any word as a relevant acronym. Alas. (A Linguist Attraction Specialist?)

As teased, the centerpiece of the new land will be a Spider-Man ride. That means theme park fans in 2020 finally will get the chance for an apples-to-apples comparison between Disney and Universal, as each company will have produced a dark ride based upon what might be Marvel's most famous character. 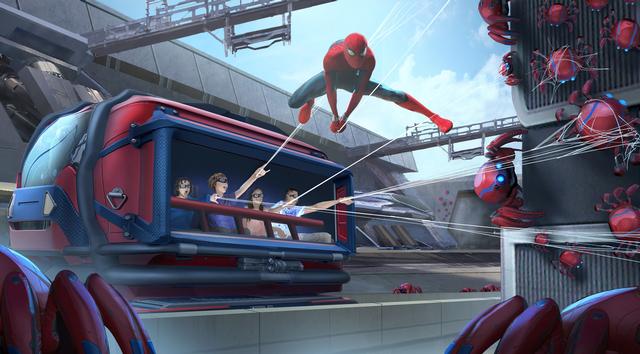 Disney's as-yet-unnamed attraction will be an interactive ride, with gameplay somewhat similar to the Ninjago rides at Legoland in California and Florida. You will use hand motions to sling "webs" to capture escaped Spiderbots for the WEB. The ride is going into the old It's Tough to Be a Bug building at DCA and later will take over the old Armageddon building in Paris.

The "who did Spidey better?" debate alone would be enough to push this new development onto a "most anticipated" list, but I also am fascinated by the idea of creating an original story that links multiple theme park lands around the world.

At the same time, I'm far more excited for the "phase two" attraction in Avengers Campus that Disney Parks chairman Bob Chapek teased last summer at the D23 Expo: a Quinjet ride to Wakanda where guests will board an all-new ride system for a battle alongside the Avengers to determine the fate of the world. That tease makes me suspect that the new Spider-Man ride might turn out to be the Smugglers Run to the future Avengers ride's Rise of the Resistance.

And that knocks Avengers Campus down a few spots on my list... at least until whatever year that new Quinjet adventure debuts.

Previously on "All aboard the 2020 Hype Train":

I’m very excited for Avengers Campus. I’m hoping the new Spider-Man ride will be as good, or hopefully better than Universal’s. I’m sure it will be even better, with new state of the art technology. I’m planning on going the end of next August. I really hope it will be open by then.

Disney will build their version many, many years after Universals Spiderman ride (I still consider this the best dark ride in the world) so I expect it to be even better. But if it is an off the shelf Lego land clone it won't be.

I'm rooting for Disney, but they will have a tough time beating Universal's Spiderman ride. It sounds like Rise of the Resistance might be a contender for the crown for best dark ride (I will have to wait and see for myself), but I haven't seen anything from the concept images that makes me think this new ride will de-throne Universal's Spiderman and/or Forbidden Journey for the title.

OT writes: "I still consider this the best dark ride in the world."

I Respond: Have you been on 'Rise of the Resistance'?

B Goodwin, I have to agree with you. Even though Universal’s Spider-Man ride opened in 1999, it still holds up pretty well. I’m curious as to what Disney will do different with their version of Spider-Man?

When Universal Studios Florida ... er ... Universal Escape ... um ... I mean, Islands of Adventure was designing Mavel Superheroes Island I'll bet they would've loved to have had this ... From WDI:

I wish I could be more hyped for Avengers Campus, but when the only ride at opening is a screen shooter in a park that already has a screen shooter it's hard to get too excited. This is compounded by the fact that the (reportedly) world's greatest dark ride will have just opened across the way and Universal's Spider-Man dark ride (among the world's greatest) has been in operation for two decades. I just don't see any way Disney's Spider-Man ride will compare favorably to what is already out there. That said, I do think the land will be great once the phase two attraction opens, but I'm anticipating that won't be until the mid 2020s.

I have to say that it will be a huge mistake if Disney intends the new Spider-Man ride to be a B side to the other Avengers attraction. I went on Universals the first month it opened, and, to this day, it remains the longest I ever waited for any ride. It was worth it. It is still one of the best attractions in Orlando. I think it is even better than Avatar. They kind of have a real estate problem in California, though. I will say what I am really looking forward to is the Guadians of the Galaxy coaster at EPCOT.

In the last episode of The Imagineering Story, they showcase the stunt robot. At one point the robot lands in a very Spidey looking way. I’m curious if the plan is to utilize a robot in the stunt show planned for DCA?

This attraction fills a needed niche and brings Disney's most powerful IP into an American park. However, Imagineering is not being given a lot of latitude here, almost as if they're being rushed to put something in the parks while they simultaneously work on other concepts to bring Marvel IPs to the parks. They re-skinned Star Tours and Buzz with Marvel IPs in Asia, and are taking an off-the-shelf ride system (that already exists 60 miles south of Disneyland), and giving it Marvel theming. I would hope Disney can plus the experience with an immersive pre-show and other thematic elements, because while I like Ninjago at Legoland, the interface can be a frustrating and tiring even when the systems are working perfectly.

The other thing that concerns me with Avengers CAMPUS at DCA is that it will create a dead zone in the Hollywood section of the park. The Marvel character meet and greets are a heavy draw for guests to this area of the park, and presuming those will move to CAMPUS, it will eliminate any incentive for guests to explore this part of the park. While that might encourage Disney to subsequently refresh this area (the only major part of the park that hasn't seen any substantial renovation as part of DCA 2.0 - Philharmagic doesn't count), it's not something that I think will happen in the near term unless CAMPUS expands into the this section instead of the rumored backstage area for the Wikanda project (though Frozen at the Hyperion might have to go - perhaps replaced by Spiderman: The Musical if Disney can get their hands on the rights).

The issue is that unless Disney can make the ride system more dynamic, which in turn would make it hard for guests to participate, it's going to be tough to top Universal's Spiderman attraction, which is still the gold standard for motion-base dark rides.

TH Creative writes: Have you been on 'Rise of the Resistance'

I Respond: I haven't been to Disney-MGM Studios ... er ... Disney Hollywood Studios in a long time because I stopped caring for Disney when they stopped building rides for a decade and introduced MyMagic+. The company also killed my love for Star Wars very effectively so this new ride won't get me back either. I keep an eye on my once beloved resort so I could go back if management would go back to the Disney standard it was once known for. So for me the Universal SpiderMan ride is still the best dark ride ever.

New Star Tours puts fans into ‘The Rise of Skywalker’