A Long-Closed California Park Has Returned

August 13, 2022, 5:27 PM · Wild Rivers first opened in Irvine, Calif. in 1986, replacing a drive-through safari on land owned by the Irvine Company, in a bid to join an ever-competitive Southern California water park landscape. That lasted a remarkably long, in hindsight, 25 years, given the value of the soil it sat on. The old Wild Rivers now has been replaced by the Los Olivos apartments near a just-okay outdoor shopping mall. (It is not the nice mall in the area.)

Today, Wild Rivers is back - on land owned by the City of Irvine on the site of the former Marine Corps Air Station El Toro. That base was home to many of the aircraft that, ah, saw action in World War II. That history has inspired the South Pacific theme at Wild Rivers; whether the South Pacific remembers that action as fondly as the big ole planes that landed at El Toro, we might never know.

To hear Wild Rivers’ legacy builders (and a handful of adults I talked to while exploring the park on Friday), the loss of the park in 2011 left a 20-something-acre-sized hole in their hearts. The kids letting loose unholy screams every time the wave pool kicked into high gear seemed less concerned about the past and more interested in the present.

So, the present. Wild Rivers opened mid-summer after breaking ground in late 2021. The park opened without its full accoutrement of rides (a soft opening, in theme park parlance) but that did not, I assure you, come with a break on ticket prices. Those run $65 for adults and $40 for kids under 48” — but more on that later.

The park can just about consider itself fully open as of early August, having cut the ribbon on its straggler slides in late July. Some credit can be given to the park for its transparency: There is a section on its website for ride availability that is (in my opinion) easy to find. How much of a balm was that for guests in the first month of operation? I don’t know. 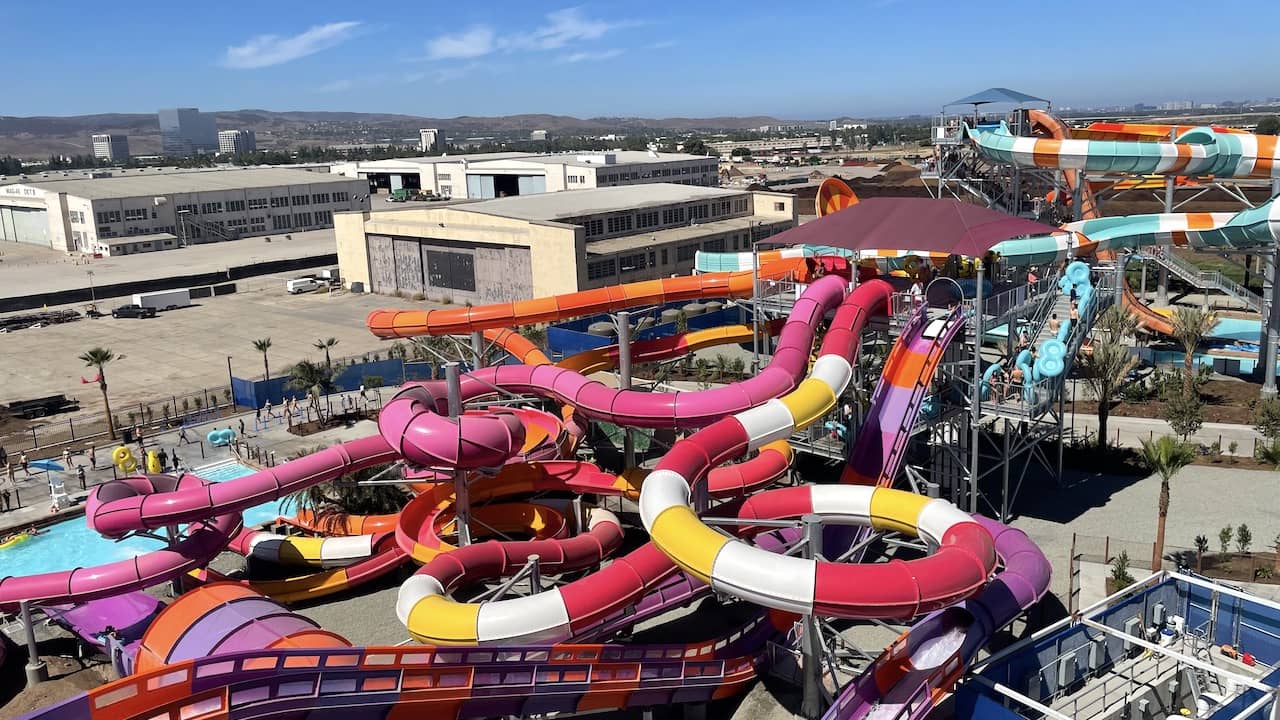 Pacific Grille, which also did not open with the park, also has come on line. So, Wild Rivers now has a pair of quick-service, grab-and-go-style eateries that are now open. Operations at Pacific Grille, where I ate lunch with my group, were running okay (chicken fingers were hard to come by), and the food was fine. The prices are reasonable by theme park standards, and I did not have to wait in any lines.

The park also has a full-service bar located between the lazy river and the wave pool (Mustang Grill). One member of my group tried a Bloody Mary which cost $9 — that may have been the stunner of the trip. I did not inquire about other prices, which in hindsight, I regret.

Seating and shade were both at a premium throughout my visit and that was most apparent directly after grabbing lunch. We ate at 1:30pm, which was not late enough to miss “the rush” of hungry families wandering around looking for a spot to sit. Some of the problems are inevitable water park hassles: People abandon their belongings on tables and chairs all day, leaving nowhere for people to actually sit. Of course, some of these problems belong to Wild Rivers. There were virtually no benches and no shade structures anywhere around the park.

But the slides? They are spectacular. Wild Rivers built four six-person raft attractions with increased capacity in mind, and I’m happy to report that the lines move accordingly. Those slides - Aquaconda, Bora Bora Boomerango, Tortuga, and Typhoon - ranked among my group-of-four’s favorites. We waited no more than 30 minutes for each attraction, some less than that — I recommend Boomerango and Typhoon.

Of course, the crown jewel of the park is its water coaster — and everyone knows it. Pelican Plunge is 558 long, 41 feet tall, and it is magnificent.

I waited 60 minutes on the nose — most of which was spent at the bottom of the hill waiting to grab an intertube from a rider. That’s a system that needs tightening up. Let’s just say waterparks and line jumpers make for pretty good bedfellows and the lifeguards and ride operators were not always up to the task of policing bad behavior. 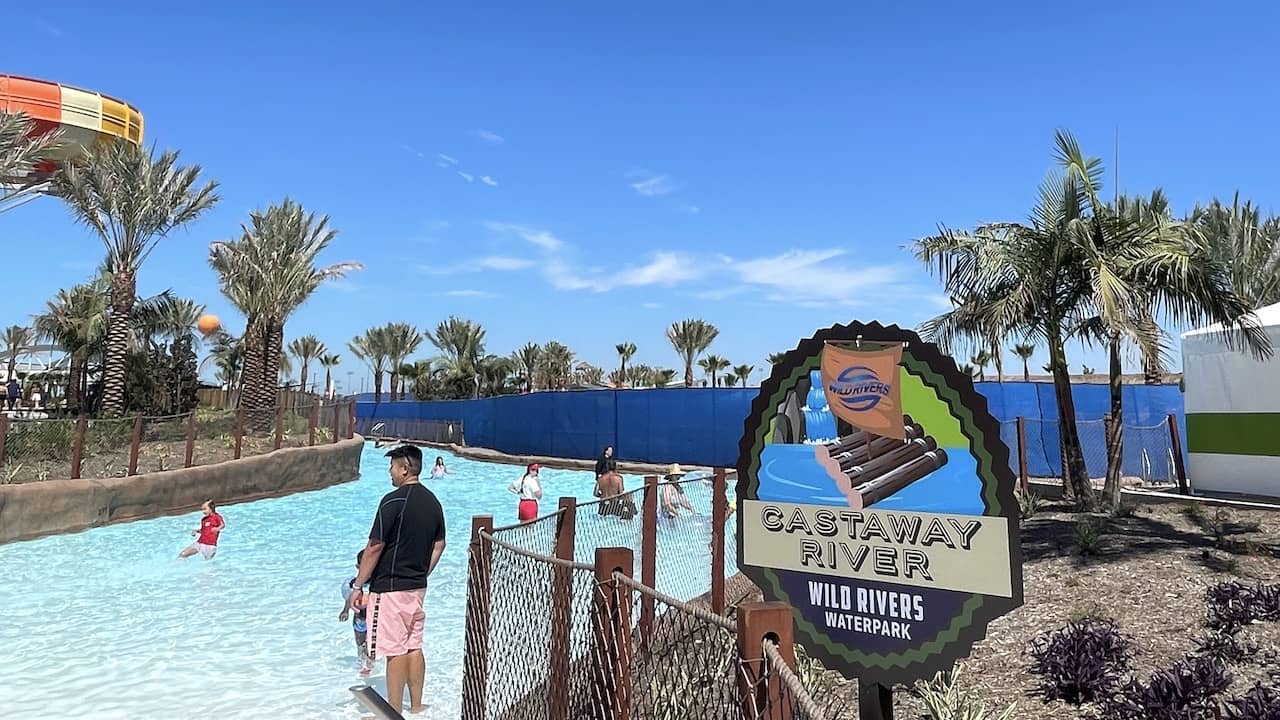 Among other highlights: The park boasts a 1,700-foot lazy river (which ranks among the longest in California — though Knott’s Berry Farm’s Soak City has them covered by 80 feet) and a 25,000-square foot wave pool. Director of Guest Experience Eric Gieszl estimated the pool holds around 450,000 gallons of water, which puts it on the small side compared to its Southern Californian brethren (Knott’s is 750,000 gallons, Raging Waters is 1,000,000) — though that discrepancy likely has more to do with the depth of the pool than the area. 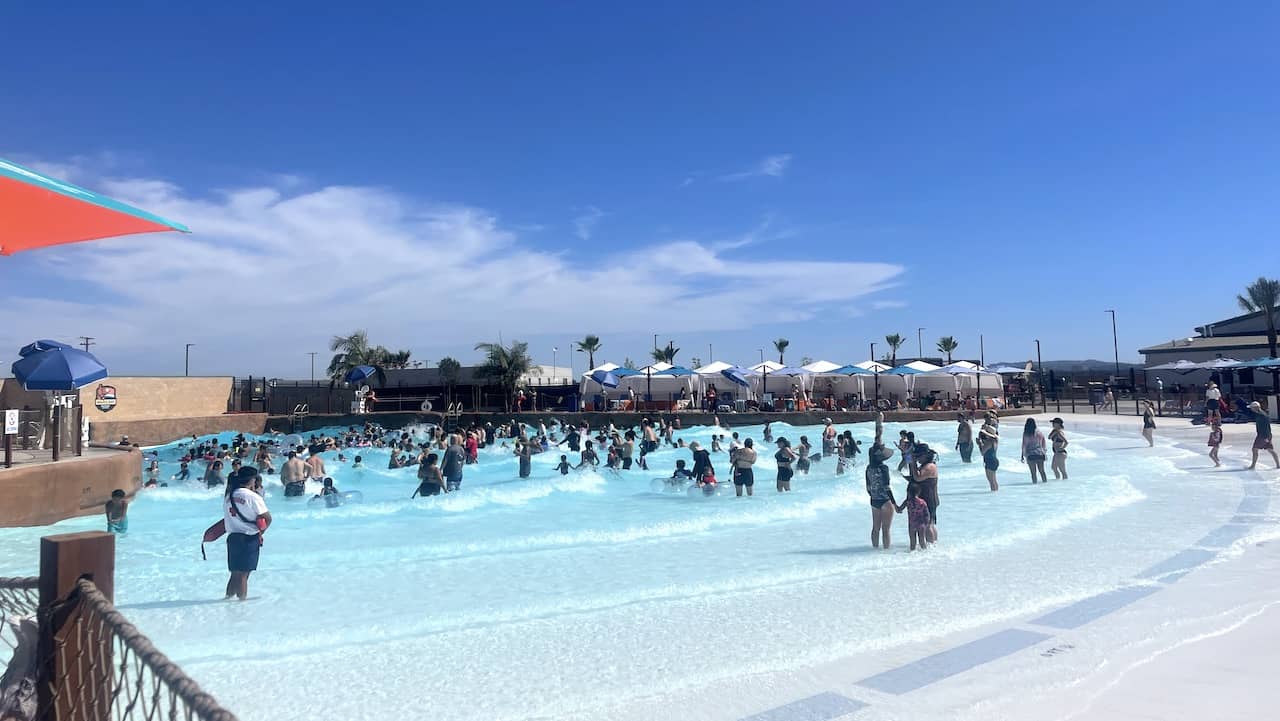 There are also five tube slides, the highlight of which is Tiki’s Revenge (we only waited 30 minutes — the wait can stretch longer depending on the time of day) and four body slides.

That includes the popular racer-style mat slides, Tomcat Racers. Wild Rivers also boasts a sizable kids area, which will be expanded in 2023 when Kontiki Cove is completed. 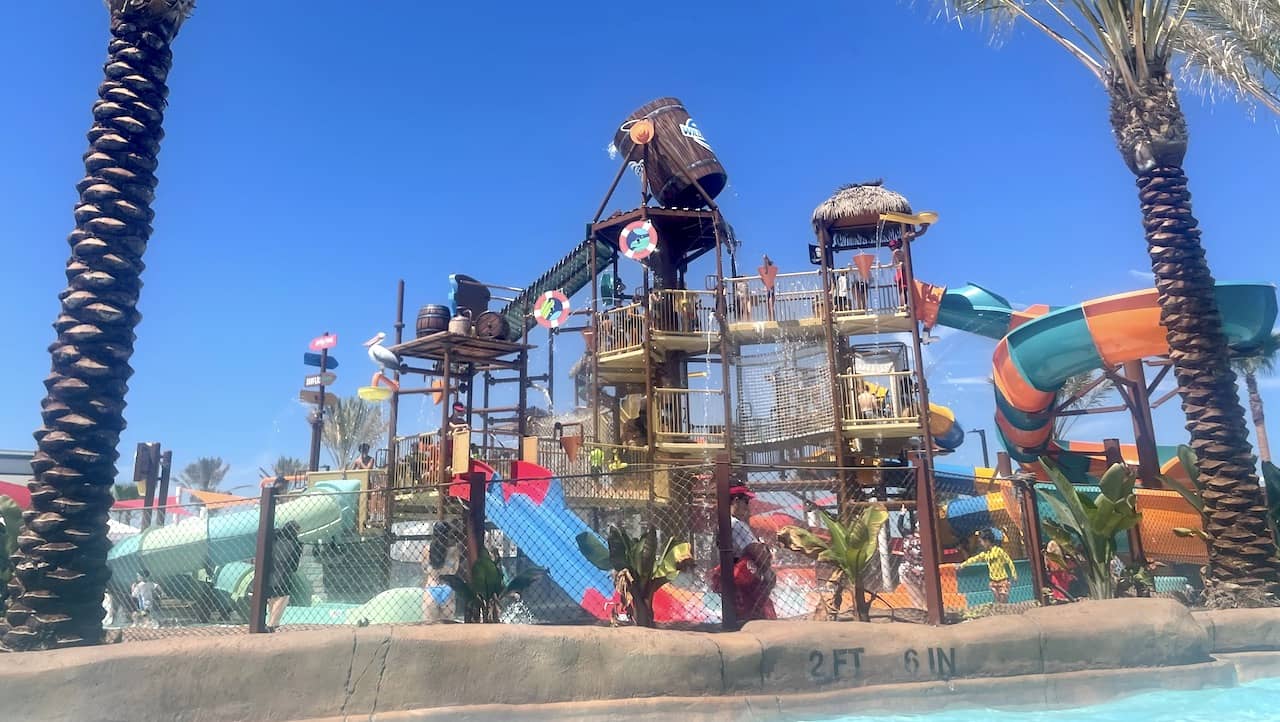 I walked past a changing room near the wave pool that is not quite open yet, and a handful of bottle filling stations were also not functioning. The dessert/ice cream shop also was not open on my visit, though Gieszl said that opening was coming soon.

Speaking of changing rooms: In what may be a more evolutionary than revolutionary change, they are kept separate from the bathrooms and instead in banks near the locker area at the front of the park. This seemed like a welcome change (and generally speaking removed one of the Things People Hate About Water Parks right off the bat). The lockers were also convenient and easy to use — a large locker costs $23, a medium $18. While we’re at it, parking is $25 when you purchase at the park. It’s $20 if you buy it online.

Perhaps the most obvious sign that the park’s primary goal was, “get open for 2022,” is the landscaping. There isn’t much of it. 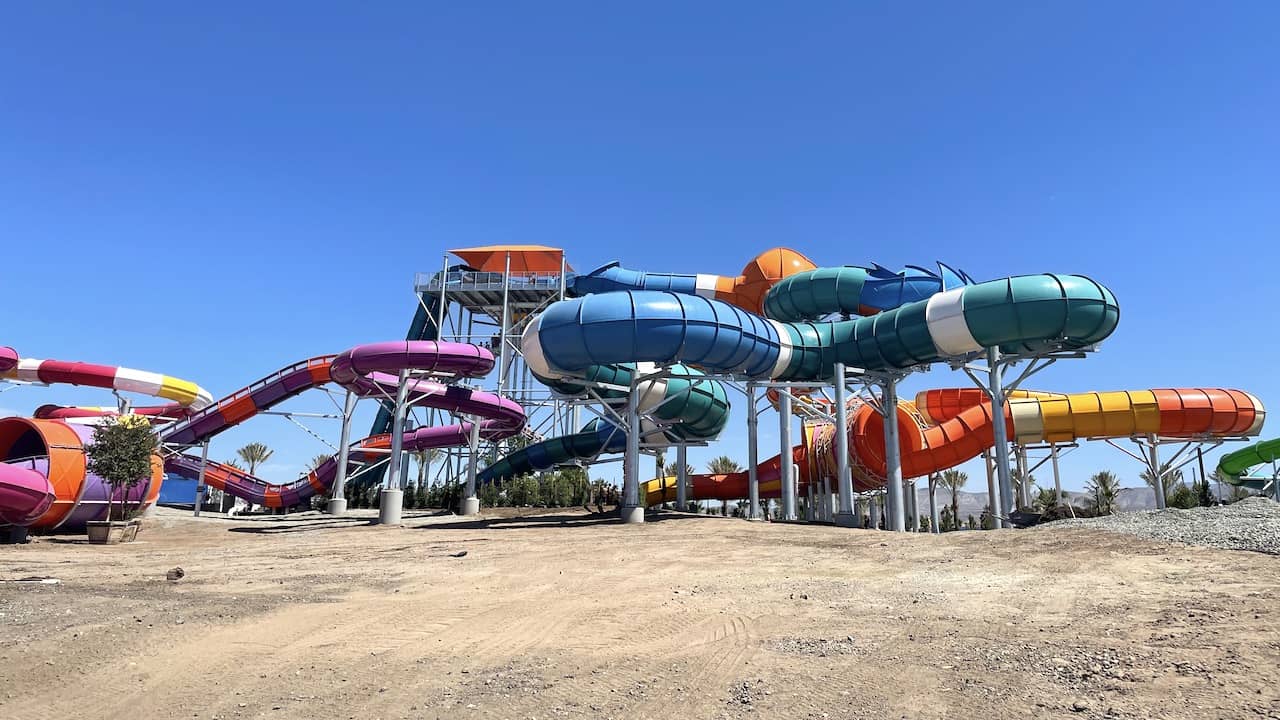 I’ve seen more barren themed areas before (see: my review of Wonder Woman: Flight of Courage), but most of the planted trees are young or palms, and the site (and smell) of dirt and mulch is prevalent. Your view on the back half of the lazy river reminded me of an under construction housing development... oh, shoot.

Wild Rivers is not the first, the only, or the worst offender of the “we gotta get this sucker open and start making money” phenomenon. This is capitalism, baby. But a $65 ticket for an adult (and frankly, for most kids) is on the high side in the Southern California market. Knott’s Soak City charges between $50-57, Hurricane Harbor between $55-60, and you can get into Raging Waters for $45. They’re not demanding Volcano Bay money ($80), but does Wild Rivers offer the best water park experience in Southern California?

It certainly has that potential. While it is an unfinished park in current form, it already boasts a wonderful collection of attractions in a convenient location for those in the South Orange County region. My advice: Rope drop Pelican’s Plunge. You won’t regret it.

I was surprised by how inexpensive the drink was.

Nine dollar margs? In Southern California? I should think that Wild Rivers could fill the place just by advertising that fact alone.

Of course, then they would have a park filled with people seeking $9 margaritas, which is not necessarily a place that I'd ever want to visit, so... yeah.

Cheap drinks with a big cover charge? That sounds like the Newport Beach crowd the modern theme park covets.

No worries — should have made it more clear!

Dude, $9 bucks for a margarita would be a bargain in my Chicago suburb, let alone Southern California. I'm more put off by the locker fees.

For what it's worth:

Raging Waters charges $25 for a large locker, $20 for a medium locker and $15 for a small locker. (https://www.ragingwaters.com/prepare-your-visit/revelant-information/lockers---rentals)

Knott's Soak City and Six Flags Magic Mountain Hurricane Harbor do not post their locker fees online, but based on some message board sleuthing, this seems about typical.

I'll confess this is the first time I've used an all-day locker at a theme park in many years and while I agree it seems steep (particularly because it's a service that benefits both the park and the user), it appears to be the going rate in this neck of the woods. So, take that for what you will.

I have fond memories of the original Wild Rivers as I grew up going to that park and live about 20 minutes from where it was located. While this new version looks much less unique than the old, it does look like a very solid waterpark and definitely the most modern in the SoCal region. Not sure if I'll get a chance to make it out this year since they've only got about a month left, but if not it's definitely on the to-do list for 2023.

Time to Hit the Beach for Cedar Point Nights