May 15, 2022, 5:14 PM · Celebrating its 20th anniversary this year and preparing to open one of its biggest attractions, Walt Disney Studios at Disneyland Paris is our Theme Park of the Week.

Disneyland Paris' second gate opened in March 2002 and this summer will welcome its version of Avengers Campus - the Marvel-themed land that first appeared last year at Disney California Adventure. Avengers Campus is the next phase of Walt Disney Studios' ongoing refurbishment project, to be followed by the opening of a new Frozen-themed land.

Avengers Campus will feature Paris' installation of the WEB Slingers interactive dark ride from DCA as well as an Avengers-themed makeover of the former Rock 'n' Roller Coaster. Joined with the original version of Disney's Ratatouille trackless dark ride and a Twilight Zone Tower of Terror (a clone of the old DCA version), WDS is looking to provide Disneyland Paris' millions of visitors with more reasons to head over to the second gate during their trip. 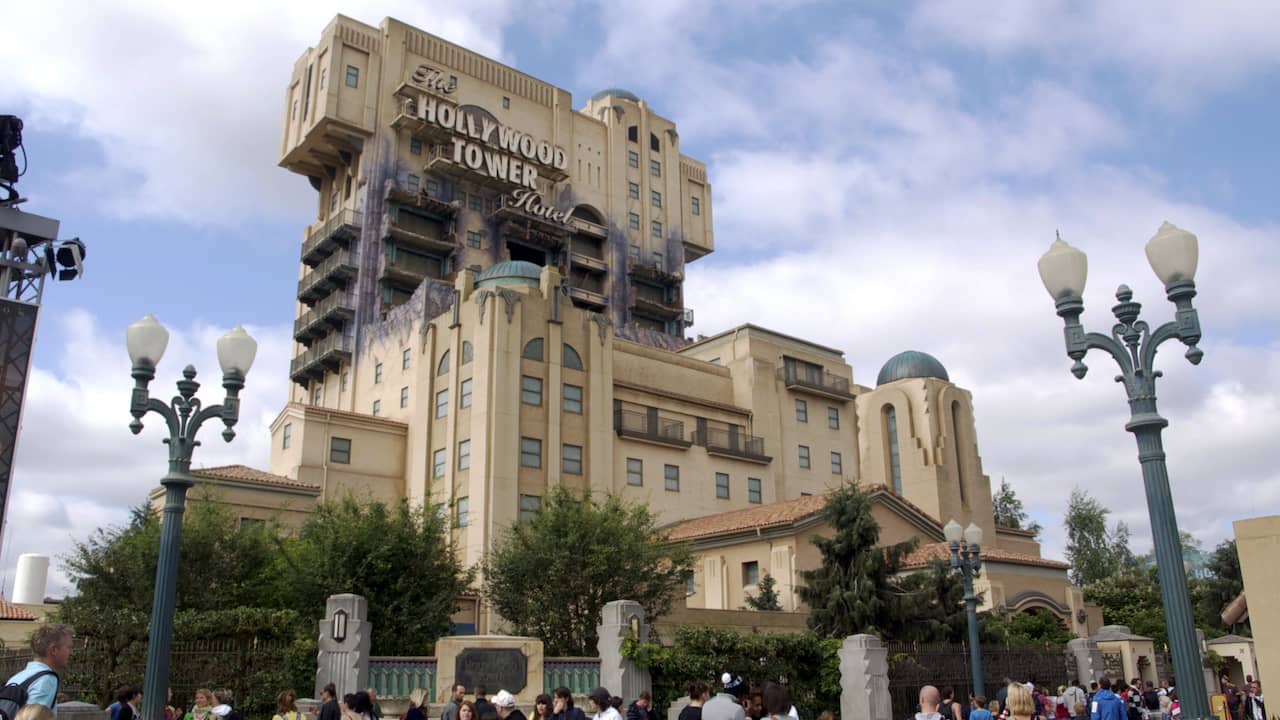 Disney legend has it that the plans for this park were presented to the Oriental Land Co. as a second gate for Tokyo Disney. But OLC officials asked if Walt Disney Imagineering had anything else to show, prompting them to haul out the old Long Beach Port Disney plans, which OLC accepted as the basis for what would become Tokyo DisneySea. So Walt Disney Studios inadvertently led to the creation of one of the world's most acclaimed theme parks.

Meanwhile, Walt Disney Studios has endured as Disney's least-visited park worldwide, thus prompting the makeover. But even as the last-place Disney park, WDS ranked among the top 25 most-visited theme parks in the world before the pandemic, and the fourth most-visited park in Europe. If you have visited this park, we would love to read your thoughts in the comments.

One of the best parts of the Disney+ Imagineering show was openly addressing how bad the park was when it started and done just to use up the land deal. But starting to rebound with good stuff so nice highlight.

Is Galaxy's Edge still on the table for this park, or is that done for?

At the DL opening, Bob Chapek said that Disney was not planning to build another SWGE outside the US, so I think the WDS plan is done.

Not sure this park deserves to be theme park of the week. It was considered to be in need of major up grades and more rides before this work began.
Upgrades included a retheme of the rockin roller coaster which is a great coaster.
A retheme of the studios tram tour to a cars theme which is poor and the Webslingers dark ride.
So other than the Webslingers ride the rest is just a retheme.

With 52 weeks in the year, that’s 52 parks if I’m not doing repeats. Honestly, I am actually struggling to complete that list. (I’ve planned the TPotW through September now.) So nominations of lesser-known parks worth covering are welcome.

I know that when talking about Disney the standards are high, but I don’t get all the criticism about DSP. Other than the spoiled people of LA, Orlando, Tokyo and Shanghai who wouldn’t like to have a park like this in his/her backyard?

That's the double-edge sword of being a second gate at a Disney resort. You can have a solid line-up, but you'll always be compared to the world-famous and iconic castle park next door.

WDS didn't have the best of openings. It's opening day attraction line-up was limited but if you look at similar park openings of the day such as Disney-MGM Studios and Animal Kingdom it is pretty comparable. The park is coming into its own and I look forward to visiting in the hopefully not-to-distant future.

I do agree with the whole being compared to its well known castle-bearing park. People would be critical about DCA, some of it deserved, but Disneyland had a 36 year head start on it to grow and develop. Second and at Disney World third, and fourth gates need time to develop. Lets keep this in mind with Epic Universe opening in a few years. It will not have a lineup as diverse and developed as the other two Universal parks up the road but hopefully it will sooner than later.

We visited the Walt Disney Studios theme park during a one-day two-park visit to in 2016. I had intended to do a trip report after our visit, but upon taking Thumper’s Mother's advice I decided if I couldn’t say something nice, I wouldn’t say anything at all. Since Robert asked, however, I’ll tell you a little about our visit.
It was a challenging day, much of which had nothing to do with the resort itself. I won’t go into details, but if you are expecting to travel to DLP on the TGV, have a reservation in advance. Without one, getting to the resort from the hotels near Charles de Gaulle is difficult without a rental car.
Our primary reason for including the Walt Disney Studio Park in our day was to ride Ratatouille Adventure. A couple of years earlier we were at Tokyo Disneyland and were charmed by Pooh’s Honey Hunt. That ride was so great, we wanted to experience this newest trackless ride. It’s fun, but lacks much of the magic found in Tokyo. My fondest memory of Ratatouille was the other guests aboard my ratmobile. We took advantage of Single Riders line for both spins through the attraction and on each journey, I was seated with French families with young children. Getting to hear them delight at the ride in French was way more fun for me than the ride itself, which is still pretty cute.
We spent a few hours experiencing other attractions found only at WDS and also had lunch before heading over to Disneyland Paris. The Rocking Rollercoaster was not operating at the time, but we did get a ride on Crush’s Coaster. It was much longer and more intense than I’d expected. Shame they didn’t build two of them like with Primeval Whir at Animal Kingdom. It’s not a people eater and its queue was very long.
I never got a chance to visit California Adventure before the renovation that completed in 2012. From everything I have gathered, what I experienced in Paris at the Studio felt like what DCA 1.0 felt like. Both opened full of cut corners, value engineering and construction based on the lowest bidder. Such a shame. Later in the day, we crossed over to the Castle park and kids…what a difference. From of my experience, DLP is the most beautiful of Disney’s Castle parks and the attractions were also wonderfully executed. It’s such a shame the studio park was not built to the same standard. I have high hopes for how it turns out with the new additions and I hope the original portions of the park are brought up to standard too.

Also, to add to Rob's thoughts, what stands out about Walt Disney Studios Paris is the lack of effort that went into the themed environments of the park. The majority of the park is themed about as well as Six Flags Over Georgia, except without the beautiful trees and canopies. The exceptions, of course, include the courtyard for Ratatouille (about half the size of the France Pavilion at EPCOT), Toy Story Land (much smaller than the one found at DHS), and the charming Front Lot before you enter Disney Studio 1 (The cheap and tacky Main Street equivalent).

@Flavio, You're right that I'd love to have this park in my backyard. But I'd rather spend time walking around Six Flags Over Georgia, any other Disney/Universal Park, Dollywood, Carowinds, and most other parks in Europe or the US if they were in my backyard.

I'll echo the other comments in saying this park's quality is subpar, even for non-Disney theme park standards. Some of the attractions are nice (Crush's Coaster being the standout), even if most are clones, but there's simply no cohesion in the layout. The design carries the energy of a student who starts a final project the night before it's due and turns in a rough draft declaring it "good enough."

Another baffling aspect that isn't unique to WDSP is the food quality. The Ratatouille restaurant connected to the ride has the best in-park food, and it's still substandard, paling in comparison to pretty much any domestic Disney dining offering. The food at DLP resort in general is in desperate need of an overhaul. Going from dining in Paris proper to DLP is like taking a few bites out of the world's greatest steak only to have the next bite turn into a charcoal briquette.

Hopefully Avengers Campus & the Frozen area breathe some much needed life into this half-day-at-most park. I know Chapek said there were no plans to take SWGE beyond the domestic parks, but could WDSP still get a Star Wars themed area that isn't Galaxy's Edge proper? I'm thinking they may build Smuggler's Run & sprinkle in some shops & restaurants.

I get what your saying about having to fill 52 weeks Robert but I still think this park is substandard compared to other Disney parks.
Even will all the hype about the new upgrades they are still pretty lame as I pointed out in my earlier post.
What about the cars ride from California adventure or one of the rides from the star wars land.
Just something more of an e-ticket type ride despite all the money Disney claims to be spending on this project.

I’m glad this park is getting some updates to make Europeans visit it. That being said, no matter what they do, Walt Disney Studios Park will always be my least priority Disney park to visit. This park is just a dumping ground for clones at better parks. Heck, even though Ratatouille originated at this park, I have no incentive to visit it the second it was announced for EPCOT.

Disney Vote of the Week: Mickey Versus Mickey