Here's How Universal Brought its Bourne Stunt Show to Life

July 19, 2020, 11:23 AM · The Universal Orlando Resort reopened last month and it didn't just bring back the same stuff that fans had enjoyed before Covid shut down the world. No, Universal decided to keep expanding, with the debut of its all-new indoor stunt show, The Bourne Stuntacular.

Universal did not host an in-person media event for the premiere, but I didn't want to skip the behind-the-scenes interview I always try to bring you when a new attraction like this debuts. So I reached out to Deb Buynak, Vice President of Entertainment for Universal Orlando Resort, who answered my questions about the show, via email.

Q: Let's start at the beginning. Why make the switch from Terminator to Bourne? And why go with a stunt show rather than another type of attraction?

Deb: At Universal Orlando, we are always working to provide new and exciting attractions for our guests. We wanted to create an experience that everyone could enjoy. There wouldn’t be a height restriction, nor would it matter if you were afraid of heights. The whole group could stay together, get out of the elements and sit down while still experiencing the thrills and excitement that Universal Orlando is known for. A stunt show offered all those opportunities. The Bourne film franchise has been wildly successful for Universal Pictures and was a perfect fit for what we were trying to achieve with our guests. We could combine extreme stunts, ground-breaking technology and practical effects to bring the excitement of the Bourne films to life right in front of an audience.

Q: Bourne has been one of Universal's top movie franchises. But if a Universal Orlando visitor hasn't seen one of the Bourne films before, what do they need to know about this franchise to get the most out of watching the show?

Deb: Visitors of the attraction will get to discover, explore and ultimately live the world of Jason Bourne with this show. The Bourne Stuntacular queue is filled with images, clips and props from the films which provide a timeline and history of how Jason Bourne went from top-ranked spy to most-wanted fugitive. Just prior to the show guests will be briefed by a familiar face in Nicky Parsons, Bourne’s main confidant. Julia Stiles reprises her role as Nicky, who provides not only thorough background information on Jason Bourne but also details on the new mission she is leading to help keep him out of reach of rogue double agents. Even if guests have not had the opportunity yet to enjoy the Bourne films, I’m sure they will want to after experiencing the show!

Q: What did you want to do differently with Bourne than Universal has done before with its stunt shows around the world?

Deb: We really wanted to change locations throughout the show. Jason Bourne travels the globe and we wanted to go with him. The variety of action we could create in each scene with unique settings, architecture and scenic elements was very appealing. This allows us to jump across Tangier rooftops, fall from a Dubai high rise and race a motorcycle through the streets of Washington, D.C. Being inside a theater was also important to us. Most stunt shows take place in outdoor stadiums. The theater setting brought lighting, LED screens and projection mapping into the tool kit we were using to build this immersive experience for our guests. 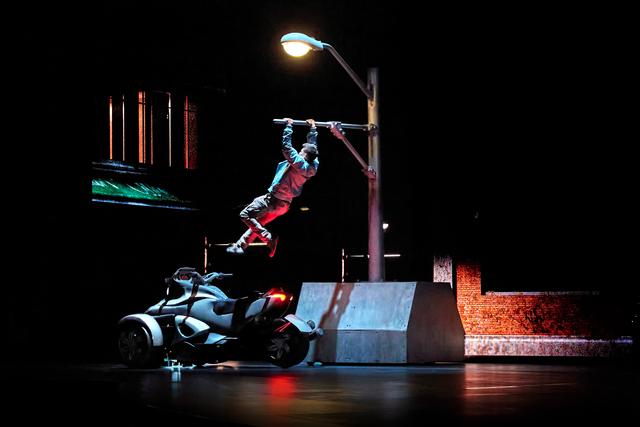 Q: Let's take the flip side. In creating an all-new show with all this new tech, what elements - if any - just had to carry over and remain the same from Universal's other stunt productions?

Deb: The heart of a stunt show will always be the cast and crew that bring it to life. We have 11 performers, 13 technicians and one quick change costumer who are on, behind, over and under the stage for every single show we put on for our guests. The performers are climbing, fighting, falling and swinging all over the place throughout the show. The technicians are monitoring the operation of all of our show action equipment, all while pressing around 75 confirm and enable buttons throughout the performance. And our amazing costume specialist is actively prepping the team of performers as they move from scene to scene. We can change how we do stunts, but we will always need amazingly talented people to pull them off.

Q: How does anyone do a safe live-action stunt show in the era of physical distancing? How much of the show had to be re-choreographed due to the pandemic?

Deb: The Bourne Stuntacular has been open to guests officially since June 30 and we went into Tech Rehearsal for the show on June 13. What’s never changed for us throughout producing the show is prioritizing the health and safety of both our guests and team members. I can start with some of the things we’re doing overall and in The Bourne Stuntacular theater specifically. To ensure proper social distancing, we have implemented new procedures in the theater, including appropriate spacing between travel parties and assisting our guests with seating and exiting the theater to avoid congestion. These procedures mean that our show capacity is currently limited and wait times may be longer than usual to experience the show. We have also increased our already-aggressive cleaning procedures and are sanitizing high-touch surfaces between each show. All guests are also required to wear a face covering while experiencing The Bourne Stuntacular.

As far as re-choreographing our show, there were some small tweaks we made that are likely not visible to guests. However, one big change we made to The Bourne Stuntacular is now the majority of our performers are wearing face coverings during certain sequences throughout the show, especially when engaging in close-range combat scenes. 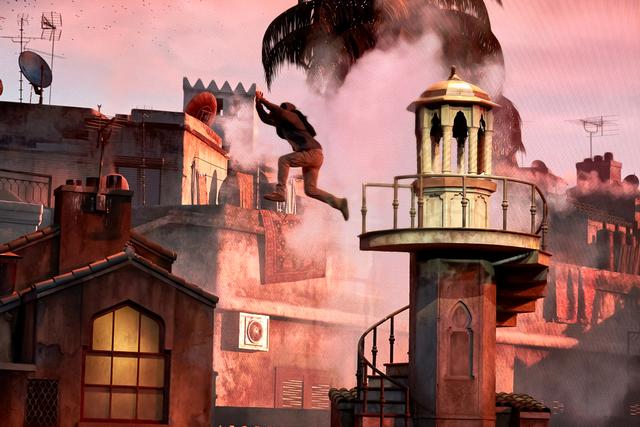 Q: What's a moment from the show that you most makes you think to yourself - "Wow, if only the audience really understood what went into that!" Explain what went into that moment, and what makes it so special from a production standpoint.

Deb: Oh gosh. There are so many unique moments in the show that I continue to marvel at myself. The Tangier rooftop chase scene is pretty complicated. Multiple buildings are not only moving on stage in sync with the action on the screen, but they are then completely crossing stage, winding around that giant screen and finding their home location back of house where they begin recharging for the next show all on their own. And while they are doing this, performers are jumping all over them, projectors are mapping them with additional effects and technicians are monitoring their every move. It is this well-choreographed ballet that keeps both the audience and our staff on their edge of their seats.

Q: What should fans look for on a rewatch of the show, that most people might not catch the first time they see it?

Deb: I highly recommend seeing the show more than once. Look for the details on the stage and screen. Try to figure out which props are digital images and which are practical. Which people are filmed, and only on screen, and which are standing on the stage right in front of you. For example, in the opening scene a man gives a street fighter a knife while another man hands Bourne his jacket. Some of these objects and people are images, some are real and some are both! It makes for a really neat scene because the lines are totally blurred and it is fun trying to figure everything out. Last fall we were testing just the media for the show on the screen. We had some visitors stop by to check our progress. They watched the action for a few minutes and commented on the fact that they didn’t know we had the cast rehearsing on stage. We didn’t. That is the moment we knew we were really onto something pretty cool.

Q: Is there anything else that you would like fans to know about this production, the work that went into it, and what you hope fans get from watching?

Deb: We worked on the project for over three years. We partnered with Universal Pictures, the Ludlum Estate and Executive Producer Frank Marshall. They were all extremely supportive during the entire development process. Mr. Marshall went from being a resource to an amazing mentor. He spent time with us here in Orlando showing us how to navigate the world of Jason Bourne. The thoughts he shared on locations, storylines and even fight techniques were invaluable to the show’s success. Speaking of fighting techniques, we also had the opportunity to have Jeff Imada, Fight Coordinator, for The Bourne Supremacy and The Bourne Ultimatum on site as well.

In case you missed it, Deb and her team at Universal posted an inside look at the making of The Bourne Stuntacular when the show officially opened.

I have good and bad memories of Universal, but stunt shows are a thing they do VERY well. The old Miami Vice stunt show in Hollywood was amazing (and the A-Team stunt show before that was pretty good), and even the old Wild West stunt show was pretty impressive, but then they went and turned an ABSOLUTELY awful movie like Waterworld into one of the most epic stunt shows of all time.

I'm not very familiar with Jason Bourne, but...Universal with stunt shows is like Disney with fireworks. You just KNOW the'ye going to get it right. Each company does a lot of other things, but this is just what they do best.

So is it a good show? Personally, I think they could've kept T23D. It was still a great show, and the 3D still looked cool, even after 20 years.

@ Kenny Vee: only trip to Universal Hollywood was in 1990 (back when tram was the only "ride") but the Miami Vice show was still great fun.

It's a great show. I watched it this past Friday, July 17th and was left very pleased. T2:3-D was a heck of a show but it was past 20 years old. This Bourne show is a worthy successor no doubt. It is fast paced and done with great effort. The technology and sets at play here are epic! It's entertaining, interesting, and like the interviewee here mentioned it is a great place to get out of the elements and enjoy a high quality attraction with all the family.

A note from when I watched the show on Friday. The production hit a snag in the Dubai section and the show manager came out and explained that this show is still working on the technical aspects of it. So they are still learning from it. The cool thing is the show never lost momentum and they were able to remedy the technical difficulty quickly and it ended as intended. It's a winner ladies and gents, check it out next time. One of the top theme park shows of all time.

It looks like a hit, and I will be seeing it this October. I question the choice of IP. It's not that Terminator isn't still relevant, I think the IP was something UO had to pay for. Bourne is a property of Universal Pictures. Years of royalty payments tend to make you look into your own film coffers.
That being said, there was a new theatrical feature in development. It would have been very disney-esque for them to tie this attraction into that.
or
Maybe this was supposed to parallel the Treadstone series which bombed.
Either way the show looks very cutting edge with the moving set pieces and digital mapping on giant HD screen.
The old Wild (WW) West stunt show and the Dynamite Nights Stuntacular were crowd favorites that bought UO a piece of central florida market share. This looks like a scion of their past creations.

Is Disney World the Safest Place in Florida Now?