Time for a sneak peek of Disney's new Ratatouille ride

December 3, 2019, 3:17 PM · The Walt Disney World Resort this afternoon invited a few reporters to walk through a portion of its under-construction new Ratatouille dark ride at Epcot.

Remy's Ratatouille Adventure will open in an expanded France pavilion next summer. It's "based upon" the L'Aventure Totalement Toquee de Remi ride that opened in 2014 at Walt Disney Studios Park at Disneyland Paris. Here is our POV video of that attraction, for your reference.

Today, after donning full personal safety gear, we walked around the back of the Ratatouille show building, which is visible from the new Disney Skyliner gondolas as they approach the Epcot World Showcase station. That took us into the ride's load area, where six ride vehicles stood waiting. They didn't go anywhere and we could not record anything inside the building, but we got a good look at the two-row, six-person trackless vehicles, which are styled to look a bit like Tsum Tsum cartoon rats.

Disney will provide an addition load station for riders with disabilities, as not to interrupt a consistent dispatch flow nor to rush riders who need extra time to board.

From the load station on the Paris rooftops, we walked along the ride path through the first two show scenes. The first is a giant curved screen in front of which three ride vehicles were parked awaiting the show. (Again, watch the POV above to see what that will look like.) From there, we walked into the restaurant pantry, over which hung a giant, 2.7-ton ham.

The conceit is that we've been shrunk to Remy's size, so of course a kitchen pantry would appear enormous, dominated by oversized food. And this practical scene is a visual delight, with giant desserts in a freezer on the far end, 10-foot sausages hanging above our heads and jars the size of hot tubs along the shelves. 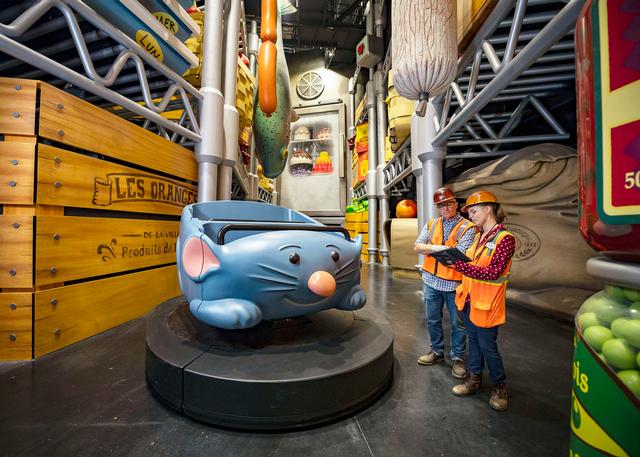 That's all we got to see on our short behind-the-scenes construction tour today, but was more than enough to... no, don't do it, Robert... I can't resist, please forgive me... whet our appetite for the complete experience when it opens this summer.

Stay tuned because there's more to come from the France pavilion.

This is the one upcoming attraction at WDW for which I can't muster any excitement. Granted, I haven't been on the attraction in France, but I get serious Antarctica vibes from the POV. Relies far too heavily on those screen sections without including any actual dynamic movement like a top Universal ride. I'm happy there will be another people eater in World Showcase and one that balances out that side with Frozen on the other, but it's not an attraction I see myself frequenting.

Obviously very rough form but not too bad.

Now if only they can get around to updating the France movie that's been playing since 1982....

Screens, screens, screens. This basic attraction was invented and peaked with "The Amazing Adventures of Spider-man" 20 years ago and has been copied a number of times since to lesser degrees (see "Transformers the Ride"). This is a fine air conditioning break in a large park, but certainly wouldn't make me want to visit.

Hmmm, three new rides opening at WDW in the coming 7-8 months...what`s not to like?

I don't get the hate for this.

Not every new attraction needs to be cutting edge or revolutionary. This is a proven people-eater, gains good reviews in Paris and is popular with visitors. It's fun, family-friendly and a much-needed addition to Epcot's thin line-up.

Fanboys stay away. I'll be heading straight there when I visit this October.

Have analysed the Paris' ride, many years ago.
As far as I heared/read, Disney wanted to do away with the failing 3D in this ride, and substitute some kind of 2.5D instead...? (How much rumour, how much reality ?)
Anyway, I welcome that step, if true. To AT LEAST avoid the main trap of the original concept, which was completely disregarding a simple fact from human visual physiology :
The real-reality (the built sets) becomes blurry, when wearing the glasses.
The D3 film becomes blurry, when not wearing the glasses.
It is physiologically impossible to see both at the same time, sharp.
I tested the "disaster condition" by taking on and off the glasses repeatedly in every scene. I got full proof, of what physiologists know since ages.
The concept of mixing up real sets with 3D film, is a perceptional absurdity.
It's not about being cutting edge or not, it's about a fatal ERROR !
...
The other, lesser pet peeves with Ratatouille, are :
- The "we get shrunk to Remy's size". It does not happen. It's marketing talk. Nobody gets this feeling. From begin to end, you ride though stuff that is very big, but there just is NO "shrinking" simulation tech (whatever it would be) in place. It's the marketing boys who say so... like in the church: based on belief... :-)
- The concept is breaking away the dynamism which COULD have been designed... by riding a bit between 2 screens (Glasses OFF if you do not want to get blurred), FULL STOP, watch a bit to a film fragment (glasses ON if you do not want to get it blurred). Repeat, repeat, repeat.
- The loading area, looks like kind of a bus station... No magic there ! It's (on the scale of the rat) a totally oversized black kind of parking lot. How is it possible to disturb the magic already when you board ?

... Sorry to be so thumbs down about the Paris' version, but that's a designer's opinion here. (Some visitors think everything is great, if just there is some 3D stuff flying to their head..) Hopefully at least one aspect gets corrected in WDW, otherwise I'dd call it : "how to clone a completely erroneous concept".

I'm surprised Disney could not alter the ride vehicles slightly here to make them 4-across, instead of 3-across. Hopefully this will have a single rider line, because I see a lot of wasted capacity and slow moving lines if groupers cannot fill vehicles with 6 guests every time.

I also don't understand the disdain for this attraction. Disney is building the world's largest indoor roller coaster on the other side of the park, so if this more diminutive dark ride isn't your style, there's something far more thrilling coming in the not too distant future. I think this attraction looks great for what it is, and is utilizing a proven template that should reduce technical issues and delays. It fills one of the biggest needs in EPCOT of insufficient "rides" in the World Showcase, and it fits perfectly in the France Pavilion. My only criticism is why did it take Disney so long to put this in, because it was a natural choice for EPCOT when the ride was installed in Paris back in 2014.

As far as the 3-D goes, I think the newer-style 3-D glasses and projection technology using prismatic lenses allow for sharper, more colorful on-screen images as well as clearer views of props and set pieces. I'm not sure if Disney will be using the new Dolby 3-D technology here (would assume so), but it's a huge upgrade from the old cross-polarized systems - it also only requires a single projector per screen instead of the 2 projectors needed for cross-polarized 3-D images. Did Disney reveal any details about the projection technology that would be used here?

And I hope they never get rid of the Impressions de France. It's nice to have a couple of rides or shows in a park when you can just chill out and relax for 10 minutes.

Funny. Never heard anyone complain about the mixture of 3-D films and 2-D physical sets in The Amazing Adventures of Spiderman...?

Are you kidding David?? People on this site complain non-stop about the screens at Universal. I may not like Disney due to their idiotic fastpass system and having to book everything months in advance but this looks like another fantastic ride.

The way I see it as long as the ride is fun and well themed I couldn't care less if it has screens or not. Welcome to the 21st century people!

@ Francis.
That’s not my point.
Herwig Delvaux above claims that it is scientifically impossible for 3D screens to combine successfully with real-life physical props. My point was that I have never heard anyone claim that Spider-Man doesn’t work because you can’t combine the two. As an attraction Spider-Man is generally considered to be one of the finest out there.

Whether Universal’s reliance on screens practically everywhere is a good thing or not is an issue that provokes serious debate. But not about the effectiveness of the technology combination!

Loooooooong time follower (daily since 2009 or so) of this site. First and foremost- Robert, thank you for the fantastic content and the way you approach your coverage. As far as theme park blog sites/blog coverage goes, in this medium you’re second to none. From neutrality to your even keeled tone, you present things as they are and let readers form their opinion- never change that, it’s refreshing. But I’m also a first time poster, I’m posting this because I’ve notice the discourse change here over the years. I don’t mean just the main articles, but I’ve even read all the years of them park apprentice, and many other threads of the like. This is a fan site for theme parks. Not for one particular theme park or another, but an information outlet that feeds our fandom. That fandom is theme parks, period. We love advances in technologies, news rides, info leaks, and if everyone is honest, we love getting that info about any park anywhere! Not just this park or that, we loooove seeing the advances in our obsession. I feel like we’ve strayed too far. Lastly- it seems a few folks have lately decided that they’reexperts in the field rather than how they used to perceive themselves- which was only as fans. This worries me because many things are posted by these individuals that are contradictory to the business, yet end up lately, lauded by a few. I’m not asserting that some individuals don’t know more than others, but I see a divide in this community a la “Lord of the Flies” with a few emerging as “leaders” when, in fact, they’re just fans like you and I. It’s just my two cents, and again, my first time posting, but this community’s voice is Robert, and the rest of us sit back and opine. There aren’t factions, we are all united (a dramatic way of saying “here for”) our love of parks and how Robert covers them. Take care, all!

This is a great ride in Paris and not at all like Antarctica which is so bad.
Super addition for Epcot.

First look at Epcot's 'Beauty and the Beast Sing Along'

Tasting our way around Epcot's Festival of the Holidays