Wings Over Washington is a flying theater done right

October 27, 2019, 5:36 PM · The Theme Park Insider team is in Seattle this week, but just because there's no major theme park in the Emerald City doesn't mean we have to spend the week without themed entertainment.

Take a short walk down from the city's famed Pike Place Market toward the Puget Sound waterfront to find a flying theater ride that does some things even better than Disney. With creative direction from Los Angeles' Super 78 and a Dynamic Flying Theater from Dynamic Attractions, Wings Over Washington plusses the Soarin' formula with a better story and decoration, giving Seattle visitors a literal overview of one of the most beautiful states in the nation. 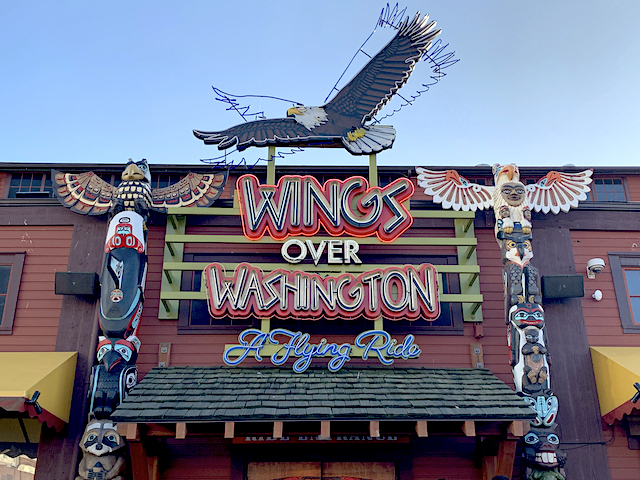 You will find the show next to The Seattle Great Wheel at Pier 57 - Miner's Landing on the waterfront. Riders must be between 40 and 76 inches tall and under 300 pounds. Tickets are $17 for adults (that's $19.57 after tax), with two bucks off for seniors (ages 65+) and another two bucks off for children 11 and under. That puts the $104-149 for a day's ticket to Disneyland into some perspective, doesn't it?

It's a valid comparison because, as I said before, this is a Disney-quality attraction, even surpassing it in some ways. Granted, Wings Over Washington plays on a much smaller scale than Soarin'. You might feel some claustrophobia in the 40-person interior waiting area if you go in expecting a Disney-style queue. But once you get over that, you will notice the thoughtful decoration that Wings Over Washington offers throughout the experience, most notably here with a detailed, illustrated, carved topo map of the state along the far wall.

With just one 30-some-seat theater here, you will wait here for the length of one show before heading upstairs for the official pre-show. Themed to a Pacific Northwest cabin, three animated "posters" at the front of the room open as "windows" through which you will watch a Washington State park ranger set up our story. 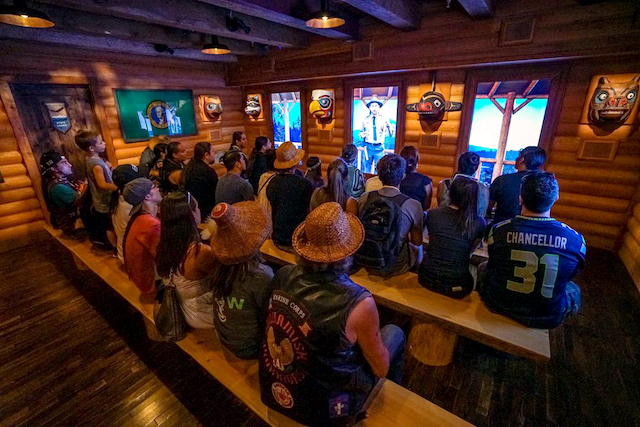 This and following images courtesy Super 78

And there is a story here. We are heading up to a tree house for an evening of stargazing. But another of the sights we will see from the treehouse is a Native totem, topped with a traditional Thunderbird. As the ranger describes it, Native legend says that one some nights, the Thunderbird's spirit will take off from the totem, leading those who watch on a fantastic tour of the land.

Animated totem heads on the walls add to the preshow, after which we walk through a portal of mist upstairs again into the theater. 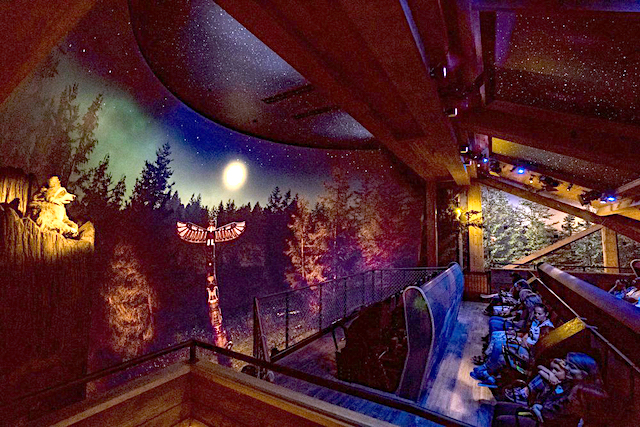 What a delight. Wings Over Washington has fashioned its theater as that promised treehouse, with an owl perched in the trees on one side and a raccoon watching over us on the other. This is no spare industrial space, facing a blank screen. We see the trees and the totem in front of us as we enter, with the stars emerging in the twilight. It's a beautiful scene that far exceeds any flying theater installation I've seen before.

As the show begins, the floor appears to drop away as we lift forward toward the totem (and the screen). In reality is the floor is rotating toward vertical as our seats pivot to remain forward-facing. It's not the same "hang glider" system as on Soarin', but this configuration means there are no feet dangling in your view, either, no matter where you sit in the theater.

The eagle guides us around the state, where we smell the pine forests of the Cascades and tulips of the Skagit Valley. We fly over an aggressively smoldering Mount St. Helens and even see a few sights familiar to fans of that other big flying theater ride, including tourists rafting on a mountain river. 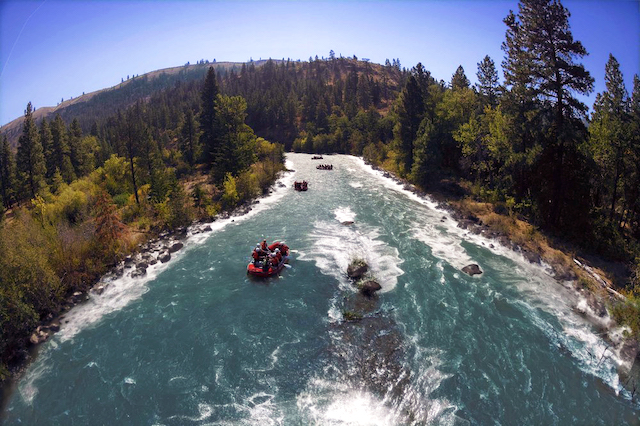 An original musical score by Antonio Di Iorio accompanies our journey. Eventually, we end up flying over Seattle, including an aerial return to Pier 57. 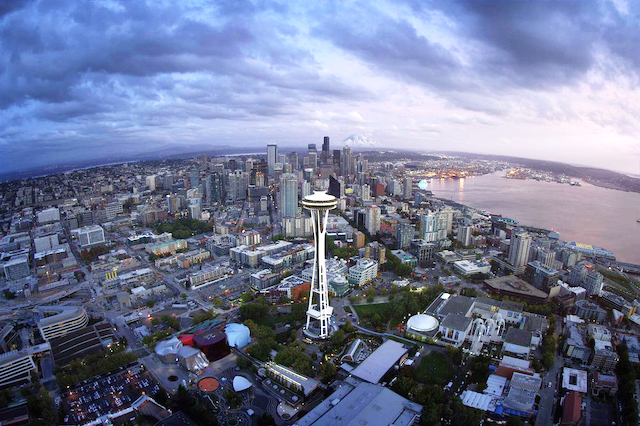 But the show isn't over until we fly back to our treehouse, watching the spirit of the Thunderbird return to its totem home as our seats return to the unload position. It's a perfect bookend to the experience, providing a welcome narrative structure for our trip around the state.

Sure, there's a fair amount of CG imagery here, used to animate several scenes including for our eagle guide. But the landscapes and seascapes here appear as live-action videography, again moving this production ahead of Disney's recent Soarin' Over the World CGI-driven spectacle.

It might be tempting for cynical travelers to write off the spread of flying theater attractions as a fad, echoing the proliferation of motion simulators in the late 20th century. And perhaps most of these shows might not last. To endure in themed entertainment, after all, attractions must deliver compelling story and placemaking — not just a hot ride system. Fortunately for visitors to Seattle's waterfront, however, Wings Over Washington delivers the complete package.

This sounds like such an enchanting attraction. I have not been to Seattle but it is somewhere I would like to go visit and this will definitely be a must do. I wonder if they are going to have more flexible ticketing options. Such as a discount for a second ride through on the same day or on another day within a specific day span for tourists.

This seems like something I would want to experience a few times, and for almost 20 dollars a ride per person, it can turn out pricey.

The problem I have with attractions like this is that they can often be very expensive for what can be a short, hit or miss type of experience. Even if it's better than a major theme park attraction, the pay-per-ride strategy here makes it financially difficult to consume compared to a day at a theme park where your admission grants you access to dozens of different types of rides and attractions.

We haven't been to Seattle in nearly 2 decades, but the last time we were there, we purchased a CityPass that allowed us access to a number of attractions (Space Needle, EMP, Boeing Museum, and others) to create value from the otherwise pricey one-off experiences. That's probably the only way I would consider doing an attraction like this, because $17/person (over $50 for my family of 3) for a motion simulator experience that lasts maybe 30 minutes from pre-show to exit is not appealing to me. Also, if paying admission for a single ride, I would insist on getting into the absolute best seats - riding on a similar attraction in a theme park gives guests the opportunity to ride multiple times and reduces the importance of getting the best seats for every ride.

Was this attraction combined with any sort of museum, other rides, or partner development - retail or dining complex?

The Seattle CityPASS, which our ticket partner offers for $99 (follow the link), covers the Space Needle, Seattle Aquarium, and Argosy Cruises' Harbor Tour, plus a couple of other options. However, neither Wings Over Washington nor the Seattle Great Wheel are among those options.

In fact, there doesn't appear to be a combo ticket for the flying theater and the wheel, either, which confounds me as their tickets are sold from the same booth.

That said, I had a solid 10-minute wait outside the building before even getting into the inside waiting area late on a Saturday afternoon in late October, so it's not like people aren't literally lining up to pay this price.

I did 2 internships in the Greater Seattle Area (2016 and 2017 respectively) and stumbled into WoW pretty much by chance. I found the attraction to be absolutely exhilarating, surpassing even the original Soarin' Over California in terms of immersion, storytelling, and sheer quality. Needless to say, I began to spread the word to my intern friends, and it became a "must-do," along with popular hikes like Rattlesnake Ledge, for all of the kids in my program. It seems to be (at least while I was there) a true hidden gem. Especially given the superior quality of the attraction, it should be commanding lengthy wait times (capacity is relatively low, as are most "flying theater" attractions), yet rarely did I wait longer than 10 minutes to reach the attraction's pre-show. This may be due to a lack of perceived value, as Russell mentions in his comment, but I also feel that the city needs to do a better job with the ride's marketing and promoting. An attraction as top-notch as WoW deserves to be witnessed by the masses, not just the few who, like me, happen to come across it while spending an afternoon down on the waterfront.

You're absolutely right SplashMtbEnthusiast. An attraction like this is meant for tourists, not locals unless they're bringing out-of-towners with them (though Robert's picture has a person with a Seahawks jersey in the pre-show), so it should be advertised and marketed with other popular tourist attractions. While it would make the most sense to be part of a CityPass type product (we've used some sort of product or other combo admission ticket for virtually every vacation we've ever taken - including abroad), they should at least work with other attractions or the local tourism board to bring in the crowds. It baffles me that attractions sharing the same ticket booth don't partner up for some type of combo ticket.

It sounds like this attraction is falling back on the "build it and they will come" philosophy. While it sounds like it's a really great experience, there are far too many options for people to experience these days to try to go it alone.

Right on, Robert! So glad you appreciate this wonderful attraction by the incredibly talented folks at Super 78. I'm a big fan of that boutique company and its top notch staff. This "ride" is so beautifully conceived and integrated into the limited space that they had to accommodate it; Wings Over Washing is really a little miracle. I hope the word of mouth brings more happy customers, but it's also the sort of gem that's a blast to accidentally stumble upon without prior knowledge.

Welcome to my city, Robert! Loved your review and totally agree that Wings is a stellar attraction. My first experience riding was as a work function (we work in walking distance) and I was blown away - now I always take visitors to ride and selfishly go on it with them as I think it’s a blast every time (I send visitors to the $40+ Space Needle on their own - although the new clear floors and walls are quite the upgrade). I took my 91 year old Dad on Wings when he visited - he walked out saying “that was better than Soarin’!”
Solid review of a really wonderful local attraction. Thank you!

I'm glad to learn about this new installation. My spouse and I visited the Fly Over Canada attraction a few years ago and had a similar response. Located in Canada Place, it used the same system and overall we felt had a more coherent theme and better overall experience than either Soarin' version. We particularly enjoyed the pre-show which had a full wall video screen setting up the different communities and regions of Canada. I look forward to trying this one out someday. The addition of a themed room for the actual theater sounds great!

Get ready to take a new way from LAX to Disneyland