What is the verdict on Alton Towers' new Dungeon? 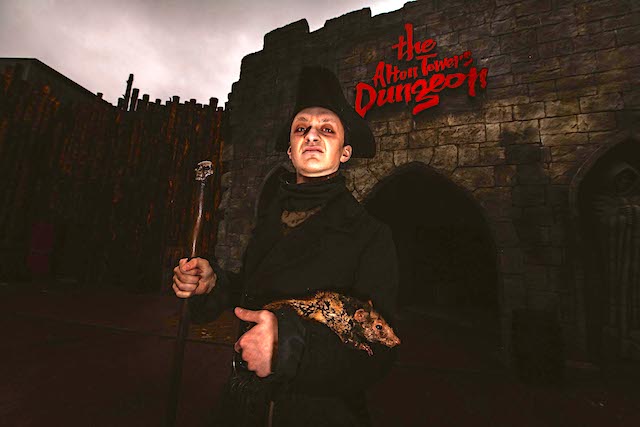 Unsurprisingly, the Alton Towers Dungeon follows largely the same format as its predecessors. An experience more akin to a promenade theatre production than typical theme park attraction, it features a string of five short scenes highlighting gruesome moments and characters from British history. Each one is led by an actor, and typically features audience interaction and sensory effects. Most have some element of pantomimishly dark humour to them, though a couple are genuinely sinister. (The park recommend a minimum age of 10, which feels about right to me given the nature of a couple stronger moments, but hardier kids under that will probably be fine.)

If you've visited one of the Dungeons elsewhere, this no doubt sounds familiar. Each reuses not only the same format, but recycles many of the same show scenes. While some are straight copies - moments featuring macabre plague doctors, rigged court trials and expert torturers are brand favourites - some invert an otherwise familiar concept. 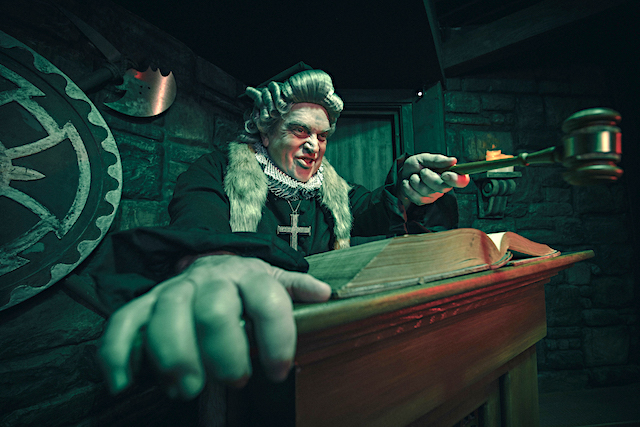 Once you've got a basic structure to a scene - intro from a bawdy landlady followed by a plunge into darkness and 4D cinema style physical effects, for example - it's easy to swap out the story to create a (superficially, at least) unique experience. Without spoiling anything, that method has been applied here to give this version its own spin.

Although many visitors to the park have likely experienced one of the Dungeons elsewhere - both Blackpool and York are within easy traveling distance - it's this tailoring to local legend that might tempt them to make a visit regardless. The park's history and heritage are inescapable (the Dungeon is tucked away in the shadow of the real-life castle that sits at the heart of the park) and attractions here are at their strongest when they draw on that for inspiration - Hex and the recent Wicker Man as prime examples. The Alton Towers Dungeon seeks to inherit a sense of authenticity from those surroundings - and when it works, it really works, using that shortcut to fire the imagination in a vital way.

There's also a short indoor boat ride thrown into the deal too; a re-theming of the old Charlie and the Chocolate ride, now featuring a mix of projection and basic animatronics to take you down the "dark river" that leads to the main chunk of the tour. As well containing some of the whole experience's most graphic imagery, it's been well-incorporated to create the feeling of drifting far away from the safety of the park.

The stars of the show however are undoubtedly the actors. Merlin consistently demonstrate their expertise in this field, and making this an upcharge attraction has allowed them to invest in performers who engage and surprise throughout. There's a fine balance in creating moments that elicit both laughs and chills without descending too far in either direction - but even at this early stage of the season, that was well achieved. 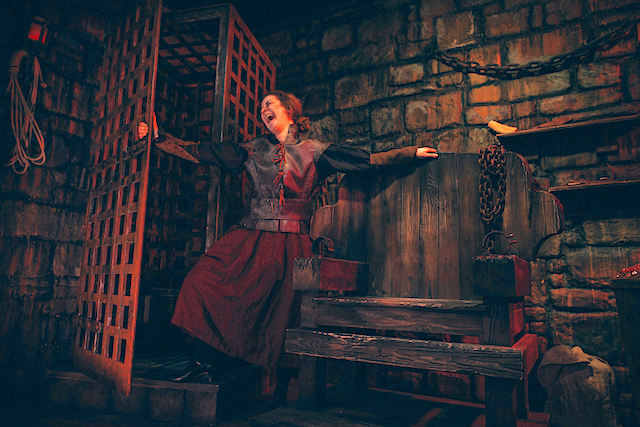 Clocking in at 75 minutes, it's slightly shorter than other Dungeons - but that choice feels appropriate, given how it eats up a chunk of your day in the theme park. (Park hours here are often just 10am-5pm.)

Due to its location at the back of the park, it seems unlikely it'll ever be offered as an option outside of park hours. Which is a real shame - for all the promotion of Alton Towers as a resort rather than just a park, there's a lack of things to do after park close, and the Dungeon could have filled that gap nicely.

It's a high-quality experience, but the question for most will be if it's worth the additional cost - whether you've been to other Dungeons or not. £5 in advance (or £7.50 on the day) is undoubtedly good value for such an actor-driven attraction, but in a park already full of more than a day's worth of entertainment, it might seem an unnecessary expense. But it would make for a solid option on a second day, or for repeat visitors. I'm hopeful they'll refresh and swap out scenes in future years as they do at other Dungeons - I'd love an excuse to return.

Been a big fan of The Dungeons since the opening of the original London Dungeon way back and consider it my favorite of all the Merlin Midway Attractions brands. The Dungeons are really the birthplace of what became today's Merlin Entertainments, before their fortuitous LEGOLAND and Tussauds Group acquisitions. Shame North America only has The San Francisco Dungeon and the brand is almost entirely European since there are plenty of venues beyond the UK and Continental Europe that have histories that perfectly suit their own Dungeon;)

Was wondering whether this attraction would be open in time for my visit next week. Although the upcharge is insignificant compared to the £100 I will most likely end up paying for Fastrack (why, oh why, did Alton Towers remove the single rider queues which made my visits much cheaper and more enjoyable?), the time commitment is such that I will probably give it a miss. With this park's limited hours of operation, I just can't take 75 minutes out of my day to experience something that interests me less than other attractions on site.

alton towers has such bizarrely short opening hours (10-4 some days even in june and even then some rides don’t open until 11) I can’t see how anyone could find the time to fit it in unless there are absolutely no queues in the park.

I like Dungeon Experiences... But I'm sorry I just can't forgive taking out the Charlie and the Chocolate Factory ride. It was just... Brilliant.

Whilst it looks good, they really needed to do something with what is left of cloud cuckoo land. It’s a bit of a jarring transition between the two areas. It would have been much better for them to do away with CCL completely retheme the area making the dungeon part of the castle

Tried the Dungeon in San Francisco and found it dull (except the last scene). The sets were nice and the actors did their best, but the stories were too wordy and meandering. A large group of strangers are led through the experience from room to room with no agency or choice.
I miss the old 49ers gold mine walk-through that used to be on the wharf. I liked being able to wander through it at my own pace being able to choose a route through the mine until finding the exit.
Newer was not better in this case.

There's plenty for even grown-ups to enjoy at Legoland Florida