September 16, 2018, 12:06 PM · While Universal's parks in Hollywood and Orlando were still gearing up for the opening of their Halloween Horror Nights, Universal Studios Japan quietly beat them to it, launching their Universal season a week earlier.

Having visited – and loved – HHN in Orlando a few times, I jumped at the chance to experience the Japanese take on the brand. The first surprise comes in learning that “Halloween Horror Nights” here is just one part of a wider event, Universal Surprise Halloween, which adds a package of family-friendly entertainment and a longer upcharge experience into the bundle.

And there's no separate ticket here beyond that upcharge – it's all an additional offering to the park's general operations. Although the mazes have staggered openings, they run throughout most of the day, and the kid-focused stuff is accessible for most of that time too. The scare zones don't kick off until 6pm – but are so performer-heavy that's no great surprise.

If you visit with the memories of Universal's stateside Halloween offerings fresh in your mind, well... USJ's design team are skilled, but they're playing the tunes in a different key. The vibe here is distinctly calmer and less all-encompassing.

There are none of the grand entrances to the houses that you'll find in other HHN iterations, to the extent that I struggled to even find a couple of them. And while what's inside is polished and often varied, it's clear that the park is working with a lower budget. They offer some great scares and cohesive settings but aren't the extraordinarily detailed environments you'll find in other HHN houses.

The scare zones operate more as fun photo opportunities than anything else – there's a distinctly lower level of intensity in the interactions, and the entire horde will periodically break out into a choreographed dance routine. For those of us used to the developing narratives and detailed backstories of the US counterparts, this feels irreverent and almost throw-away in comparison.

But it's another example of the park playing to its specific audience. The same rule applies here as elsewhere: if you stick to the sidewalk you'll be left alone, but venture into the road and you're fair game for the scareactors. As a result, almost everyone seems to stick to the sides, just baiting the performers for long enough to grab a selfie and jump back to safety.

(And don't expect too much in the way of variety here. Each horde is just a different flavour of zombie – clowns, pirates, etc. I was a little disappointed to discover that the Jurassic Park section went with a “tribal” theme rather than going all-out with zombie dinosaurs. USJ – or any other park for that matter – please make that happen.)

As for the attractions themselves, the park splits the adult line-up into two categories. 'Screaming Halloween' takes a more typical Halloween event vibe comprised of Insidious: The Last Key, Survival 2 – Deadman's Forest, Cult of Chucky, and SADAKO. The 'Sophisticated Halloween' attractions have a more mature vibe, featuring Blood Legend, Silence in the Ghost Ship, and Hotel Albert. 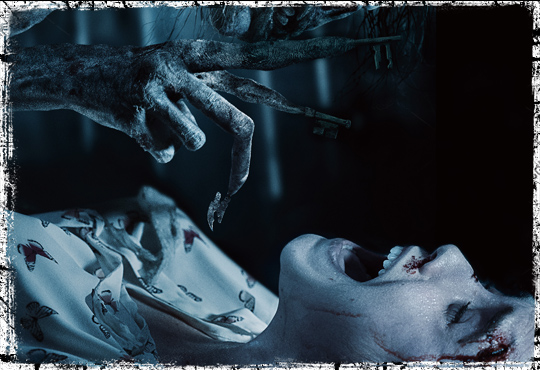 Insidious: The Last Key (Rating: 7/10)
One of the more atmospheric mazes, Insidious was also the one where I felt the most at a lost due to a combination of not having seen the recent film and not speaking any Japanese. (There's a lot more pre-maze spieling in Japan than you'll be used to as an Orlando or Hollywood vet.) And so, naturally, my Express Pass got me placed at the front of our batch, leading to some awkward character interactions.

But these interactions ended up being my favorite thing about the maze. Without venturing into spoiler territory, there's some brilliant diversions and distractions, and an ingenious use of a key prop that gave me the biggest scare of the night. 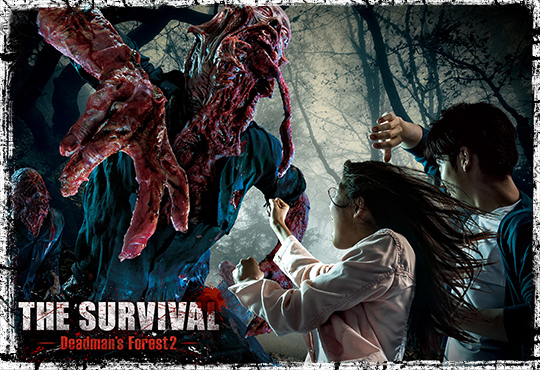 The Survival – Deadman's Forest 2 (Rating: 8/10)
In one of the best rug-pull moments I've experienced in a theme park, what starts as a talky and slightly laughable pre-show (set in the Backdraft show building) about monsters invading a secure facility suddenly flips and plunges us into a deliriously fun part-maze, part-escape-room scenario full of tricks, twists and brilliant creature design.

Although the tension is almost killed by weak operations batching into the maze, the following 10 minutes are so full of invention and surprise as to redeem itself. It's not big on genuine scares, but that's not the point here. Embrace the mayhem. (And bonus points if any non-Japanese speakers can work out what's actually going on plot-wise. I certainly couldn't.) 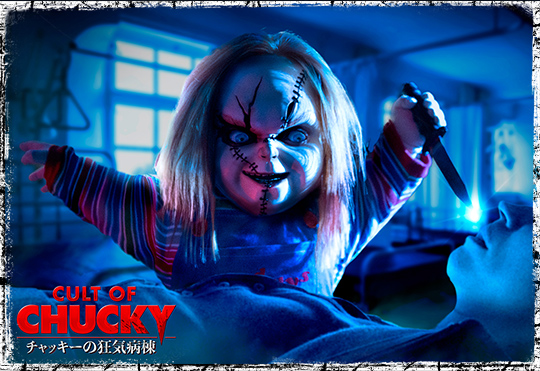 Cult of Chucky (Rating: 6/10)
Returning for a second year owing to the Japanese love of the character – I guess he's kawaii from the right angle? – this one's based on the 2017 film that sees multiple Chuckies terrorising a psychiatric ward. What it lacks in variety and narrative complexity it makes up for in scares, having probably the best hit rate for jumps of all the mazes. If you love the Michael Myers-led mazes from other HHNs, you'll get a kick out of this one. 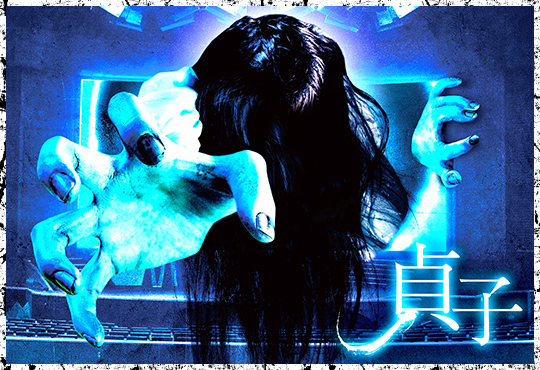 SADAKO (Rating: 4/10)
If Chucky's a big deal for the Japanese, then Sadako – the “girl in the well” from the Ring films – is an outright icon. This isn't a maze, but a “haunted” reworking of the Terminator 2 venue that sees the usual Cyberdyne presentation overtaken not by the Connors, but by Sadako and the VHS tape from the films.

There's little in the way of scares here – when Sadako eventually makes her appearance, she's greeted by cheers and applause rather than screams – and whatever set-up is there will go entirely over the heads of non-Japanese speakers. But anyone familiar with the original T2:3D show will just about keep up, and it's a novelty to see the disruption to the usual show.

(Avoid landing in the front row for the pre-show though, if you don't fancy a spotlight. As the only Westerner in the room, I became a running joke for Japanese Kimberley that I never quite translated, but that the audience found consistently hilarious.) 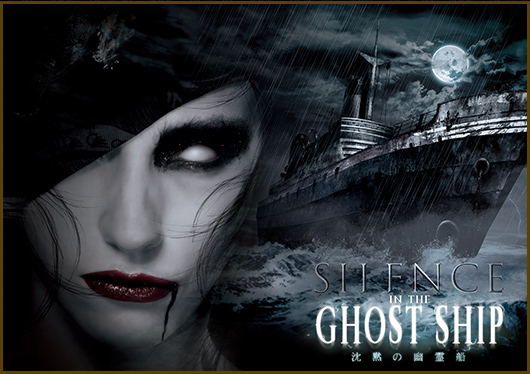 Silence in the Ghost Ship (Rating: 5/10)
The unique concept at play here is that the maze demands your silence. Make a noise (like, I suppose, a scream) and you'll attract the attention of the ghosts that lurk on this abandoned ship. I loved the concept, and there were some great genuine performances in here beyond the typical scareacting, but unfortunately it never quite came together for me.

Whether our party made noise or not didn't seem to have all that much effect on the response of the ghosts, and it didn't build the tension through the course of the maze in the way Universal's houses can typically do so masterfully. But this seems like a prime candidate for “most likely to improve,” and the beautiful design work makes it worth the trip all the same. 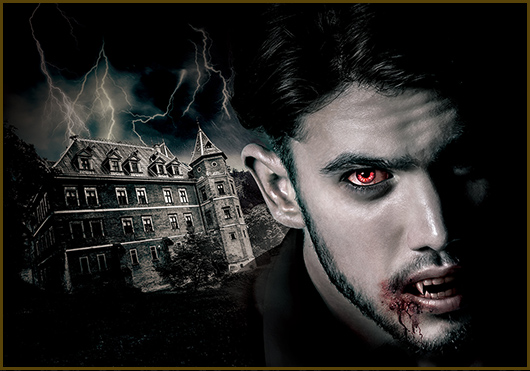 Blood Legend (Rating: 3/10)
This one was a victim of over-expectation for me. Taking over the park's 4D cinema, it starts with a well-executed “found footage” film about a couple of teenage girls stumbling into a vampire's lair and some live actors chasing each other around the theatre, before we proceed into... the Sailor Moon gift shop? The film certainly works as a good horror movie should, even if the live actor moments elicited laughs rather than screams. But particularly having visited this after Deadman's Forest, where the theatre takeover is mere prelude to the main event, I couldn't shake the feeling that this should have been more than it was.

Although this is a distinctly “better” attraction than SADAKO on a technical level, I've rated it lower simply for its theme park context. Where SADAKO feels like an event, albeit cheesy and a little thrown-together, Blood Legend is a good short film in the wrong setting. 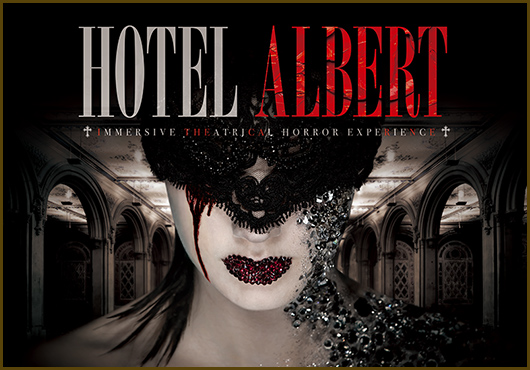 Hotel Albert
While I'd happily spent ¥7,470 ($67) on Express Passes for the other Halloween attractions to make sure I could get through them all in one day – pretty much impossible otherwise, given USJ's ticketing system – I stopped short at dropping another ¥5,480 ($49) to check out Hotel Albert, an 80-minute immersive experience.

The one set piece I caught a glimpse of looked stunning, but while it sounds fascinating – a role-playing murder mystery full of character interactions that sounds like the kind of theatre made mainstream by companies like Punchdrunk – there were pretty serious warnings about it requiring you to engage with the performers in a way my non-existent Japanese would have prohibited. Still, if you're around for a couple of days and it's the kind of thing you're into, it might still be worth a go. (I'd love to hear more from anyone who does get to it.)

Kowa Kawa Halloween
Beyond the adult offerings, there's a variety of seasonal activities for kids. The Festa de Parade seemed to be the highlight – a Mardi Gras inspired parade through the park. I managed to catch the Happy Trick or Treat, essentially an elaborate opportunity for hyperactive distribution of candy. And trick or treating extends to costumed staff members around the park too – including in the Wizarding World of Harry Potter itself, which I assume is a first for a Universal park? The adult scare zones don't kick off until 6pm, so there's plenty of opportunity for younger visitors to get their fill in the daylight hours.

Was buying Express Passes worth it? As a USJ first-timer who wanted to squeeze in as much as I could in a day, definitely. Knowing I didn't have to negotiate the notoriously tricky ticketing system for the houses (which go even faster than a top-tier Fastpass) was a weight off my mind, and the price is definitely favorable in comparison to that at other parks.

On the downside, being tied to specific half-hour slots to visit the Halloween offerings meant that negotiating queues for the park's general attractions was tricky. And in a couple of instances, all my Express Pass actually did was put me at the front of a batch I'd have got into using standby anyway. (The day I visited was about as off-peak as you can get - don't expect that to be the norm.)

In any case, if you manage to hit all the HHN attractions, or just do a couple and otherwise soak up the vibe, you're in for a good time. While not on the scale of other HHNs, USJ's offers a solid line up and - included as part of a day's general admission - even better value.