August 13, 2018, 10:28 PM · I am back in Orlando this week for the grand opening of the Aventura Hotel at the Universal Orlando Resort. But before that main event tomorrow evening, I took this opportunity to catch up with my first live viewing of the new nighttime lagoon show at the resort, Universal Orlando's Cinematic Celebration.

Dubbed "Universe of Color" by the more sarcastic among us in the theme park fan community (hey, why is everyone looking at me now?), Universal's new show certainly fits the mold popularly established by the Disney California Adventure production. Water screens? Check. Pyro? Yup. Rousing, popular movie songs? Uh huh. Clips from beloved films? Gotcha. No over-arching theme or narration to distract us from those clips?

You've seen this show before, haven't you? 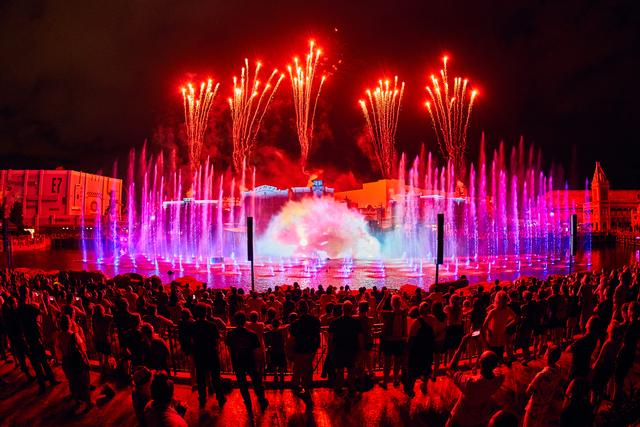 But you haven't. Because Universal Orlando's Cinematic Celebration is unmistakably a Universal production, featuring the park's best known IP. A split-second of Fiona displays the only princess you will see here.

Jurassic World kicks off the show, followed by Fast & Furious, then an old-school call back to E.T. before bringing us through DreamWorld Animation with Shrek, How to Train Your Dragon, Kung Fu Panda, and Trolls. Then we're back to live-action hits with Transformers and Harry Potter, before the Minions make their first appearance. But that's just an appetizer setting up the menu for several Illumination properties, including The Secret Life of Pets and Sing. Finally, Gru and the Minions get their turn, bringing us home for the grand finale.

It's a 20-minute love letter to the stuff that elicits so much love from Universal's fans, from action to animation. What better way to wrap a day spent with these favorites than such a sweet wish farewell?

If you don't want to wait to see the show for the first time in person, or if you've already seen it and want to experience it again online, here's the full show video from tonight's performance.

Stay tuned for full coverage from the Aventura Hotel tomorrow!

Finally a nice night time show, reason to stick around late in the park.

Now hopefully they can address the screen issue.

I loved World of Color, and since Universal can't use the types of fireworks you'll find at Magic Kingdom or Epcot, this was probably the best alternative. I can't wait to see it myself. Now let's just add a night parade like Japan's and USF will be set for evening entertainment.

when is this show running till?? we arrive 09/04/18 and would love to catch it but HHN starts the 14th so will it end before then??

Any Back to the Future scenes?

Thanks for the video Robert ..... at least I now know what the loud booms and bangs are associated with every night .... :)

More Disney-like changes to come will only help Universal Parks!

This looks perfectly wonderful. A big night time spectacular has always been a tricky thing for USF to pull off. There have been attempts, but I think they have found their format. Like WOC, this will be easy to modify and update, which is especially important for Universal as they have shown in recent years that they are more focused on what is upcoming and new than what is nostalgic.
Islands of Adventure was designed and built with a big night time spectacular in mind. I think designers learned their lesson with USF. That park’s center lake (does it have a formal name?) is long and narrow. As a result, no one spot along the shore offers a great view of anything. IOA’s *Inland Sea* (yes – that’s what it is known as) is basically round and each island has lots and lots of lake front viewing built in; Sneach Beach, Sweet Haven, and all those paths along the shore on Jurassic Park, Marvel Superhero Island and Port of Entry were all designed as show viewing. The Wizzarding World of Harry Potter lacks it, but there is quite a bit of viewing behind Mythos. Some may remember that there was a fireworks show the first year "The Adventure Lives On". The song can be heard on the final track of the Official Soundtrack Album. It was sold in the park for several years. Unfortunately - the show was short lived. The neighborhoods around the parks constantly complained because of all the fireworks. In park attendance levels at closing also didn’t justify the cost of the show. As a result, the show only ran regularly for one, maybe two years to best of my memory.
Now that there will be around 6,200 hotel rooms onsite with the opening of Universal’s Aventura Hotel as of 8/16/18 there are more guests than ever who are on site at closing. Perhaps we will see another big closing show for IOA in the near future.
Now, if they would just get that amazing parade from USJ!

The covered seating area next to Transformers was filled before the show starts, yet as far as I could tell, there's basically no good view of the show from there. You need to be in the Central Park viewing area to see the whole thing.

The screens look smaller than for World of Color, but I estimate that you're closer, so it all seems the same size when watching it. Plus, the projections on the New York buildings behind help expand the scale of the production.

Now, come on, surely we can get a horror film-themed version for Halloween Horror Nights, right?

There should definitely be a horror nights nighttime show.

Step inside for a first look at Universal's Aventura Hotel

Which new project will change the direction of theme parks?