June 14, 2018, 2:26 PM · If there is a theme to Dreamworks Animation's hit Kung Fu Panda franchise, it is that nothing is as it seems. From cuddly animals to secret ingredients, Kung Fu Panda is a world of misdirection, where truth and adventure lie behind deceiving facades.

Thus it is with Universal Studios Hollywood's newest attraction, Kung Fu Panda: The Emperor's Quest, which follows our titular hero, Po, and his companions on a journey to deliver the MacGuffin-esque "Liquid of Limitless Power" to the Emperor.

I can hear your yawns. Another screen attraction from Universal? The park's new Dreamworks Theatre replaces the old Shrek 4-D theater with an impressive Mission Revival facade, but the rest of this set-up seems utterly conventional. It's another 4-D show, featuring a cartoon character on a contrived "quest," where surely something will go terribly wrong. Been there. Done that.

But this is Kung Fu Panda, and as I warned you, nothing is as it seems. The preshow opens with familiar characters, starting with the Magic Mirror from the previous Shrek 4-D production. A Who's Who of Dreamworks Animation stars introduce the show, and we're off into the theater. Nothing unusual here. 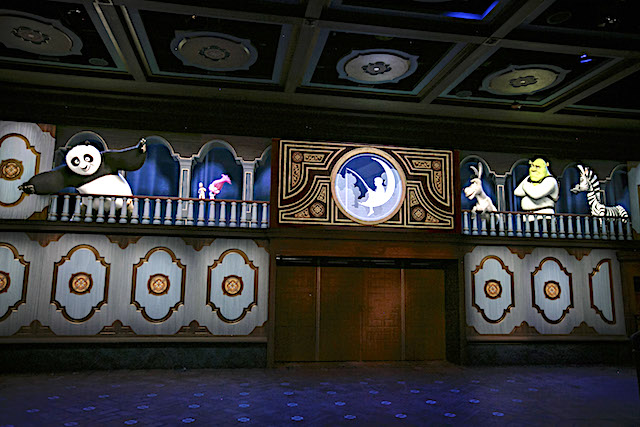 Look carefully at that theater when you sit down, though. Those curtains across the screen? The decoration around the proscenium and doorways? It's all an illusion — the prelude of an ambitious projection mapping production that will elevate this show far beyond any previous theme park 4-D production.

And let's talk about those "D"s, shall we? Universal is presenting The Emperor's Quest in 2-D — in wonderful 4K, projected via seven Christie 4D Boxer Cinema projectors, but in 2-D nevertheless. The comfortable, staggered and tiered seats in the theater will jiggle and shake, and spritzes of water will accent moments in the show. But what about that math?

Nothing is as it seems.

The first couple of minutes in the show proceed conventionally, as we sail down a raging stream and rumble across a tattered bridge, all the while shaking in our plush seats and enjoying the delightful original score by Germaine Franco. But when we reach the Emperor, and it seems that our story has ended, the production really begins. 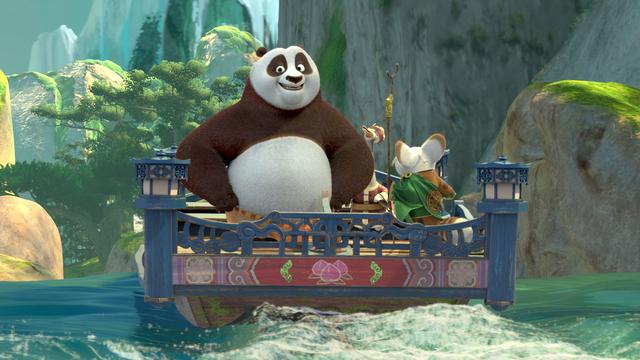 With a smash of the Ming Hammer, we enter the spirit world, where the boundaries of the proscenium crumble to allow this production to play on three walls around the audience. Universal Creative's team makes deft use of projection mapping here, leaving just enough of the "structure" of the theater walls to provide a frame of reference to sell the illusion that we are spinning in this otherworldly realm. It's an amazing moment, unlike anything I've ever seen in a theme park theater show before. This is movie magic.

Universal opened its Dreamworks Theatre this morning with a ceremony hosted by Mr. Ping and featuring characters from several other Dreamworks franchises, including Madagascar, Trolls, and Shrek.

Park president Karen Irwin suggested that the theater will host productions featuring other Dreamworks franchises at some point in the future, but, for now, Po and his crew seem comfortably settled in their new home for a long run.

Well, at least it seems that way.

It sounds incredible. It's a shamei can't muster more enthusiasm for it, just not a big fan of Kung Fu Panda. I think how to Train your dragon would be a much better show to base it on.

More screens. Does the Universal creative team struggle with the perception they are overdoing screen attractions? Enough already.

We want family friendly attractions that have no screens !

Isn't this just Muppet Vision 2.0 with repurposed seats from Honey I Shrunk the Kids?

What about the last room in Mystic Manor?

Stevo: No this is Kung Fu Panda based. I don't believe the muppets make an appearance. Can't say where they got the seats from but I would imagine they just kept the ones from Shrek that did the exact same thing.

Well Barry I don't know, but if you look closely at the video you might see Waldo C. Graphic in the background.

Ah!! I will look out for that when I visit in August. In reality, I was mildy interested in this attraction and now my interest has been peaked. Mostly because of Robert's enthusiasm. I'm sceptical but projection mapping does make it interesting...

To be clear, I rated this a "Not a must-do, but also recommended," with the projection mapping and the unique "rotating theater" moment pushing this toward the must-do status for dedicated theme park fans. For casual fans, it shouldn't be as high a priority as the Wizarding World and the Studio Tour, but I suspect that after initial crowds pass through, this will become an easy, comfortable and fun mid-afternoon "get" in the park.

Well, it seems to have worked in Hollywood, so they should really replace Orlando's Shrek 4d with this too.

Interestingly, the preliminary scores coming into Universal Creative are showing another “screen based” disappointment. And, those are scores from employees and die hard USH fans!

In time, Universal Hollywood will be forced to follow Disney’s lead!

The author of this blog post even stated it’s NOT a must do.

After watching the video, I'm a bit disappointed. It isn't a must-see. It's another filler attraction. There isn't much of a story. It's merely a boat ride in a screen-based theater attraction.

Positives: Very good quality screen. Best technology so far that was confirmed by the video.

Negatives: I hated the watery languid boat sequences with the long drops and the crashing into walls/planks. It had similar sequences and motions like The Simpsons attraction. I was waiting for the boat sequences to be completed so the story can begin. Not much else afterwards.

I will have to experience it in person to see if it's actually better, but not hopeful.

I've been on the ride...experience....show?
It's exactly as expected but I had hoped they used the 180 screens to better use. They use it sparingly for some effects during the ride and only really fully integrate it for the finale of the experience.

This venue would be better utilized with a how to train your dragon experience. Those flying sequences will really be something with a 180 degree screen

Not a fan of the films but the video does look very good in making it work.

It kind of looks like what I expected. I mean, this is a 4D show that replaced another 4D show. It really isn't that much different than:

Get ready for a Cinematic Celebration at Universal Orlando this summer