Where to eat? Dinner at Magellan's at Tokyo DisneySea

January 2, 2012, 9:00 PM · For my final meal at Tokyo DisneySea, I followed the advice of several Theme Park Insider readers and booked my dinner at Magellan's, considered by many of those readers - and colleagues I know in the industry - as the finest restaurant at the Tokyo Disney Resort.

As the sun was setting over Tokyo, I walked up to the restaurant with about a half hour to spare, so I spent that time wandering around the Fortress Explorations exhibits that surround Magellan's. Inside this citadel, you'll find 10 individual exhibits, from a pendulum tower… …to an alchemy laboratory… …to my favorite, the Chamber of Planets. This is a cathedral to astronomy, designed with exquisite detail, in tribute to an era when science stood up superstition and showed humanity a more enlightened way. The planets surround our sun, with the heavens painted on the ceiling above. Extending from the pedestal are several arms with handles, with which you can turn the planets in orbit around the sun. Alone with the solar system, I spent several minutes literally making the Earth move. My most sublime moment in a theme park has been those times I stood on the island-side dock of an otherwise empty Tom Sawyer Island, at sunset in the Magic Kingdom, watching the lights come on in Frontierland. Thousands of people would be in my view, but I stood alone, separated from them by the waters of the Rivers of America - alone in a very public place during that graceful moment when day slipped into night.

I thought of that while standing inside the Chamber of Planets, enjoying another sublime moment, alone with all eternity.

But it was time for dinner. Walking into the restaurant, you realize that you're on the second floor of a rotunda, which is dominated by an immense globe. The hostess led me from this main dining room into a second, more intimate room on one the side of the restaurant. My hostess then presented me with the menu, which continued the story of the "Society of Explorers and Adventurers" who founded the citadel I'd just explored. (Take a moment to figure out that acronym, by the way.) Magellan's is not an a la cate restaurant, but offers several choices of multi-course meals. Watching my yen at the end of my journey, I opted for the least expensive one, at 4500 yen (about $59 US). Remembering how much I had enjoyed my lunch at the S.S. Columbia Dining Room, I was thrilled to see that the appetizer course was another serving of scallops. But as much as I again enjoyed the scallops, they couldn't match the salad - mesclun greens with cheese and walnuts in balsamic dressing. The peppery greens and astringent dressing balanced the rich cheddar perfectly. I noticed that the waitress didn't even ask if I wanted freshly ground pepper on my salad, which seems to be a federal regulation in America. She knew it didn't need a thing. The entree was roasted breast of duck with orange sauce (in a familiar pattern...) After two chewy bites of the duck, I'd wished I'd opted for the daily fish selection instead. I've only really enjoyed duck once in my life - roasted and served with a dark cherry sauce at Spago in Beverly Hills. Every now and then, when I'm in a restaurant that I think might be able to match that experience, I give duck another try. But I'm coming to realize that I just don't like duck as much as fish, or a good steak. So unless duck's the house speciality (which it's not, when it's on the least expensive menu at the restaurant), I probably should just go for another option.

Dessert made me feel much better, though, as dessert inevitably does. A taste of hazelnut cake with a bite of grape ice cream.

As I sipped my hot tea, after finishing the last crumbs, the feeling came over me that this trip was now finished. I'd entertained thoughts of taking the train into the city the next day, before my flight was to leave in the evening. But when a trip is over, it's done. I'd felt the same way at the end of each of our summer roadtrips - when I knew that there was no longer any need for diversions and side-trips - that it's time to get going straight home.

And so, after paying my check (with no embarrassment this time), I did. I stood, zipped my jacket, pulling the collar up against my ears in meager defense against the cold Japanese winter night air, and made my way out of the restaurant and back to the front of the park. The next morning, I slept in and started downloading the many photos that you've seen here on the site, before catching an express bus back to the airport for my flight home.

I hope that you've enjoyed traveling through Asia's top theme parks with me. Tomorrow, I'll share some final thoughts about the trip, as well as some advice on planning a Tokyo Disney Resort vacation.

James Koehl
January 2, 2012 at 9:37 PM · I'm standing up and applauding you right now. This is the best thing you've ever written for TPI.

180.32.183.56
January 2, 2012 at 9:50 PM · Living part of the year in Florida, and Part of the Year in Japan, I have been lucky to go to this park several times as well as WDW. I LOVE both places. Disney Seas is my preferred park in Japan because of its uniqueness. I like to go to this restaurant right after the fireworks/light show. It does indeed make a great END .

James Rao
January 2, 2012 at 10:13 PM · This James agrees with that James: phenomenal trip reports, Robert, and very much appreciated. It has been a wonderful journey for this vicarious travel companion. Thank you.

Did you know about the secret dining room? On our visit, I specifically asked for a table there when checking-in at the restaurant.

On one side of the restaurant is a bookcase. Hidden in the decorations of the shelf is a button which opens a secret door (the bookcase slides apart) and you enter a room decorated like a wine cellar. After you enter, the door closes again.

Unfortunately, I only took one picture while we ate there and it doesn't show a lot of the room. Also I forgot to take a video of the secret door. 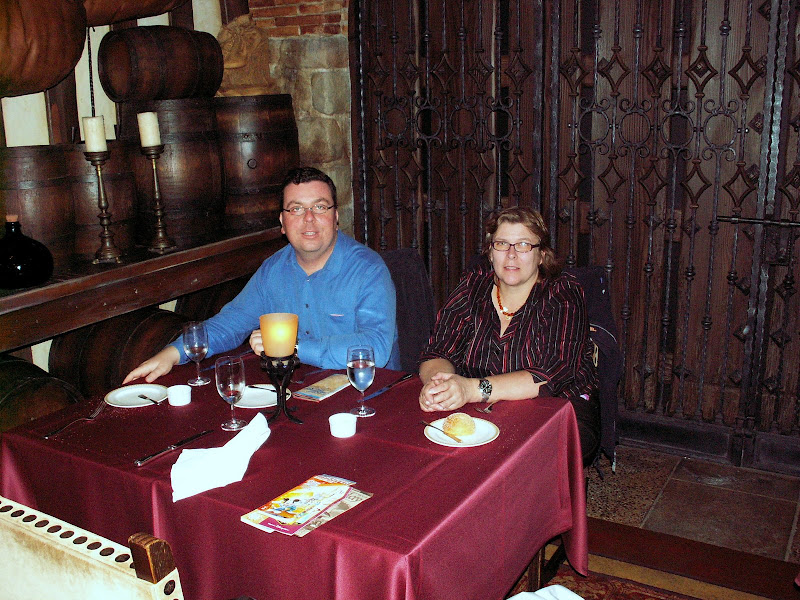 Ricardo K
January 3, 2012 at 7:36 AM · This is great! And it shows me that one cannot see everything in one day. I only spent one there at DisneySea and I had no idea these things were these! Too cool!

While it seems that most people share your philosophy, I travel and explore until the last minute. If my flight doesn't leave until the afternoon, you better believe I'll be taking in another attraction that morning. I find it actually helps you transition nicely from "vacation mode" to "travel mode". While you realize you are leaving in a few hours, at least you're doing something interesting rather than waiting in the hotel or airport.

Tim Hillman
January 3, 2012 at 9:46 AM · I skipped Fortress Explorations because I only had 6 hours in the park, and I thought it was a childrens play area. I was so wrong. Now, I'm sick because for me this attraction would have been right up there with Indiana Jones and Tower of Terror.

Before the Forbidden Journey was added to IOA, I had DisneySea neck and neck with IOA as the best parks in the world. Had I seen what was in Fortress Explorations, I would have ranked it above IOA. With all of the incredible things Universal is doing with the Harry Potter franchise in Orlando, the point is probably moot.

With a few modifications like finding a different E-ticket to replace Tower of Terror, this park should be added as the fifth gate in Disney World.

That globe is amazing- as a collector of globes, this would be a dream to see in person.

While we always planned the TDR visit to the end of our trip, in order to make the most of our time at the resort, we booked another night before flying home in a nice little ryokan in Narita, where we went to after leaving the park in the evening.

In the morning there was still enough time to walk around in Narita for a while and see a local temple before taking the train to Narita airport around noon.

Robert Niles
January 3, 2012 at 2:46 PM · I think the "trip's done" thing is just my internal clock telling me that I'd best stop pushing it and just get off the road - that I'm too spent to take in any more. It almost never kicks in while I still have specific things planned, though, only toward the end of my trip when I'm in "free time." Which is good, I suppose.

Ed Newman
January 3, 2012 at 5:38 PM · Thanks Robert. Really appreciate the time and effort you spent sharing this travel experience with us.

With a little effort and internet research, I could easily find a review or article about these Asian parks from a travel correspondent. But it would not be half as enjoyable as what you have written. Mainly due to your background as a former cast member and (more importantly) a fellow theme park "fan".

Thanks for keeping this site so fresh and appealing. Best wishes to you and your family for 2012...