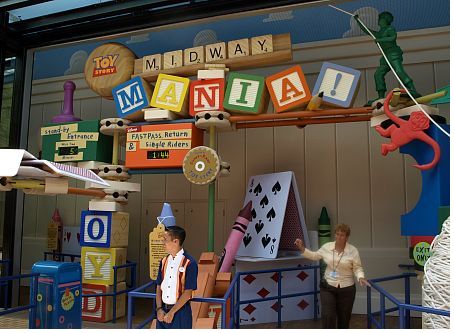 The sign settles it: The name is "Toy Story Midway Mania" 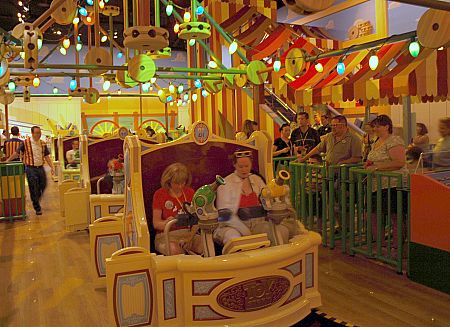 Each target is labeled with its point value. (I saw a range from 100 to 5,000 points.) In the later games, hits on certain targets will spawn additional targets, often with higher point values. There's a hint of 4D action, too, as some popped "balloons" will produce a gentle puff of air and other targets splash a few drops back on riders. Walt Disney Imagineering senior show producer, director Chrissie Allen explained that the carnival games at Disney's California Adventure provided the inspiration for the ride, which will debut in the Anaheim, Calif. park next month.

"Our original concept designers... were amazed that midway games were still really popular with guests," she said in an interview with TPI. "So we thought, wouldn't that be a cool thing to do, in a new technology sort of way?"

One of the more impressive pieces of new technology in the attraction appears before one sets foot on the ride. The five-foot Mr. Potato Head in the ride's queue might be the most impressive audio-animatronic figure yet created. Incredibly articulate and expressive, in body, eyes and mouth, Mr. Potato Head plays the role of carnival barker, hyping the ride that awaits. The figure is so good, that it'd be worth waiting a few minutes to watch him even when the ride is otherwise a walk-on. 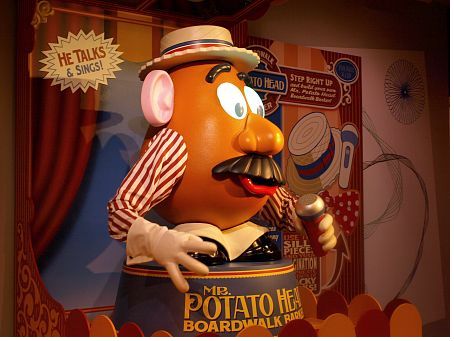 FWIW, west coast theme park fans: Allen said that the ride at California Adventure will be the same as the one at Disney's Hollywood Studios, though the exterior setting will be different (a 1920s-style boardwalk instead of a Pixar-like modern movie studio).

So how did I do? My gun didn't work on the first trip, which did allow me to take notes on the various ride and point values. On the second ride, I scored 114,900, with 23 percent accuracy (TSMM reports shooting percentage as well as point value - nice touch!), and on my third and final trip, I racked up a 119,400, with 24 percent shooting.

Overall, Toy Story Midway Mania is a cute and engaging ride, a fun game well worth playing again and again. No, it doesn't offer the deep immersive narrative that one would find on top 3D dark rides like Spider-Man. But that's not what this ride is designed to do. On Toy Story Midway Mania, as Woody told Sid in the first film, "it's play time!"

So far, every review I have read has had nothing but good things to say about Disney's new attraction. Most people are putting Midway Mania on the level of a solid "D Ticket". Not quite as good as the "E Ticket" rides like Tower Of Terror, but definitely fun, engaging, and addictive. Along the lines of an updated Buzz Lightyear.

I normally can't stand midway games at my theme parks, but I do like video games, so this attraction looks like a real winner for me! And the theming of the attraction, the queuing area, and Pixar Place all look just outstanding. Real nice work, Imagineers.

Jack Williams
May 14, 2008 at 7:14 PM · Can't wait for the DCA opening. The ride at Florida sounds cool, but I really want to experience the pier atmosphere that's far more logical for this form of ride.

(Note: On my last visit to DCA, I noticed that there will be boardwalk games sprouting up in front of the ride, on an expansion of the Paradise Pier land section. My guess is the existing midway games and the cheap gift shops will become Disney's next dark ride for that area. What it could be, I'm not sure. Stitch, maybe (I know, Stitch is Hawaii, so please don't point that fact out if you read this comment).

Robert Niles
May 14, 2008 at 7:22 PM · I'd also put the ride solidly between a D and an E ticket. The spinning aspect happens only as you turn the corners between the games, and kinda hides the fact that you're really just going up and down aisles in a big room. The spinning is automatic, too, not under rider control.

Also, the ride has closed the loophole I've used to rack up big scores on Lightyear. If the ride pauses at any point, the point values on all the targets go to zero during the delay. So you can't use a ride delay to slam a high-value target over and over, jacking up your score.

Targets also pop/crack/explode/disappear after being hit, before reappearing a moment later, which further limits your ability to hone in on a single high-value target.

But with TSMM costing around $80 mil x 2, and another 1.2 BILLION being pumped into making DCA a real Disney park, the theme park coffers have to be stretched a bit thin right now, don't you think? Jobs and Lasseter have their Xmas bonuses to consider amid all this spending!

Besides, "D Tickets" make great family attractions and bigtime people movers. Disney loves the people movers! Well, they don't love The PeopleMover, but they love rides that move a lot of people, if you get my meaning. =)

Mitchell Botwin
May 15, 2008 at 3:57 AM · I tried to get on the ride over the weekend during the soft opening, I would wait on line and then told the ride had a technical problem, please leave and come back later. Did find the hidden Mickey in the candy land portion of the queue.